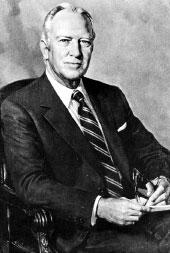 William Pierce Rogers (, &ndash; , ) was an American politician, who served as a officer in the administrations of two s in the third quarter of the 20th century.

Rogers was born , , in Norfolk, New York. He was raised, from early in his teens, following the death of his mother, by his grandparents, in .

After education at and Cornell University Law School, he passed the bar in 1937. Under he worked from 1938 to 1942 in the prosecution of in . He entered the in 1942, serving on the USS "Intrepid", including her action in the . His final rank in the Navy was lieutenant commander.

While serving as a to a US Senate committee, he examined the documentation from the 's investigation of at the request of then-Congressman , and advised Nixon that Hiss had lied and that the case against him should be pursued.

In 1950, Rogers became a partner in a New York City law firm, Dwight, Royall, Harris, Koegel & Caskey. Thereafter he returned to this firm when not in government service. It was later renamed , and subsequently Clifford Chance Rogers & Wells. He worked in the firm's office until several months before his death.

Rogers joined the Administration of President in a Deputy-Attorney-General position in 1953, and then served from 1957 to 1961, as . He remained a close advisor to then-Vice-President Nixon, throughout the Eisenhower administration, especially in the scandal that led to Nixon's , and during Eisenhower's two medical crises.

As Deputy Attorney General, Rogers had some role in or insight into the process that led to the execution of for espionage. [cite news |first= |last= |authorlink= |coauthors= |title=Podcast: Spies and Secrecy |url=http://cityroom.blogs.nytimes.com/2008/06/26/podcast-spies-and-secrecy/#more-3235
quote= |publisher= |date=, |accessdate=2008-06-27 By Sam Roberts]

He also served as in the Nixon , from through , when he among other things initiated efforts at a lasting peace in the through the so-called . However, his influence was gradually usurped by Nixon's national security adviser, . Rogers received the in 1973.

Rogers is also notable for leading the investigation into the explosion of the space shuttle "Challenger". This panel, called the , was the first to criticize management for its role in negligence of safety in the program. Among the more famous members of Rogers' panel were astronauts and , Air Force general , and physicist .

Rogers died of congestive heart disease in , , in , and was buried in . At the time of his death, Rogers was the last surviving member of the Eisenhower Administration.

In 2001, the Rogers family generously donated to Cornell Law Library [http://library.lawschool.cornell.edu/WhatWeHave/SpecialCollections/Rogers.cfm materials] that reflect the lives of William and Adele Rogers, the majority of items from the years 1969-1973.