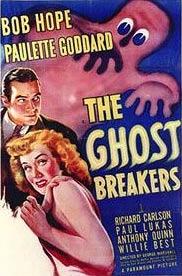 "The Ghost Breakers" is a 1940 directed by George Marshall and starring and . The movie was adapted by from the play "The Ghost Breaker" by and . [ A History of Horror [http://eric.b.olsen.tripod.com/break.html] ]

The film opens in a radio studio during a broadcast by crime reporter Lawrence Lawrence () -- “Larry” to his friends, as well as his enemies, who are many in number among the local underworld.

Listening in on the broadcast is pretty brunette Mary Carter (), whose high-rise apartment goes dark as a violent thunderstorm causes a city-wide blackout. In the near darkness, a knock comes at her door. It is Mr. Parada (), a suave, vaguely sinister solicitor attached to the n consulate. He informs her that she has inherited a plantation and mansion, “Castillo Maldito,” on a small island off the coast of Cuba. Despite Parada’s discouragement, she impulsively decides to travel to Cuba by ship to inspect her new property.

Shortly after Parada’s departure, Mary receives another visitor-- Mr. Mederes (), an even more sinister gent who extends an offer to purchase the newly inherited property. Despite his insistence, Mary declines.

Meanwhile, after Larry Lawrence has finished broadcasting the evening’s exposé of a local , he is met by a pair of henchmen and kidnapped. The crime boss, Frenchy Duval (), makes it plain to Larry that the attention isn’t welcome, and it would be “healthier” for Lawrence to cease and desist.

Coincidentally, this exchange takes place within the same apartment house where Mary Carter lives. In a mix-up in the still-darkened building, Larry accidentally fires a gun and believes he’s killed one of Duval’s henchmen. In the confusion, he escapes Duval’s apartment and finds himself in the rooms of Mary Carter, who is already busy packing for her journey. Believing that he is being pursued by Duval’s men, Larry hides in Mary’s large open trunk. Unaware of Larry’s presence, Mary locks the trunk and arranges for its transport to the harbor.

Later at the dock, Larry’s Alex () searches among the luggage bound for loading and finds Larry among them. Although not in time to prevent the trunk’s transfer to the ship’s hold, Alex manages to get on board, hoping to extricate his employer before the ship sails.

Once in her stateroom, Mary is shocked to unpack Larry along with the rest of her belongings. Just as he tries to explain his situation, a knife is thrown through an open in Mary’s cabin, narrowly missing her and Larry, and embedding itself in the cabin door. Attached to the knife is a note, warning Mary to stay away from the island plantation. Larry and Alex decide to remain on board, partly to act as to the plucky beauty, but also to keep out of Frenchy Duval’s reach.

As Larry and Mary strike up a flirtation, they run into an acquaintance of Mary's, Geoff Montgomery (), a young professorial type who regales them with tales of the local superstitions of their destination, particularly , ghosts and zombies. Impressed by his knowledge, Mary invites Geoff to accompany them to the plantation once they arrive.

Upon reaching port in , Mary, Larry, Alex and Geoff are ferried to the island. En route they find a shack occupied by an old woman (Virginia Brissac) and her son (), who she explains is a zombie. Despite Geoff’s skepticism, the group is unnerved by the cadaverous appearance of the “zombie.”

The imposing plantation manor proves to be a spooky edifice indeed. The quartet begins to explore the long-abandoned, cobweb-ridden mansion, and discover a large portrait of a woman who is nearly an exact likeness of Mary-- most certainly an ancestor.

Soon the quartet is terrorized by the appearance of a ghost, and the reappearance of the zombie. Are these real, or are they a ruse to frighten Mary away from her inheritance?

The Dickey and Goddard play "The Ghost Breaker" was filmed twice previously by Paramount. It was first made in 1914 by , with stars and , and again in 1922 by director , with and starring. Both these are presumed lost. [ [http://www.silentera.com/lost/index.html SilentEra.com lost films index] ]

George Marshall, director of the 1940 version, remade "The Ghost Breakers" in 1953 as "", featuring ( and ). The remake featured cameos not only from Hope, but also from . A year before "Scared Stiff", Martin and Lewis appeared in the Crosby/Hope film "".

The film was adapted for radio on "Screen Director's Playhouse" on April 4, 1949 with Bob Hope re-creating his film role and as Mary.

"The Ghost Breakers" was a of sorts to Paramount’s 1939 hit "The Cat and the Canary", also starring and . Paramount teamed the pair again, along with costar , in "Nothing But the Truth" (1941).

would go on to earn an nomination for his work on another spook-filled Paramount release, "The Uninvited" (1944).

appears as an ambulance driver in the opening of the film.