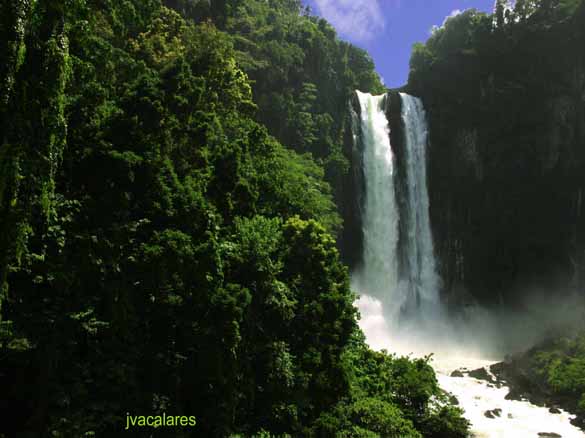 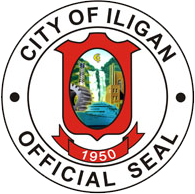 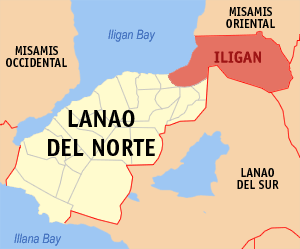 mapsize =
map_caption = Map of showing the location of Iligan City.

The City of Iligan (Cebuano: "Dakbayan sa Iligan"; Filipino: "Lungsod ng Iligan") is a Highly urbanized city in the province of Lanao del Norte, , and the province's former capital. It is approximately 795 kilometers southeast of . According to the 2007 census, it has a population of 308,046 people.

Known as the City of Majestic Waterfalls, there are around 23 waterfalls in and around Iligan. Among them is the magnificent , home of 's primary power station, and .

Iligan is also the Industrial Center of the South. It produces hydroelectric power for the Mindanao region through the National Power Corporation (NAPOCOR), the site of the Mindanao Regional Center (MRC) housing Agus IV, VI and VII hydroelectric plants. It also houses industries like steel, tinplate, cement and flourmills. The National Steel Corporation, one of the largest steel manufacturers in the Southeast Asian region, now Global Steelworks International Incorporated was re-opened in 2003 after heavy setbacks resulting to its closure in 1999. Iligan along with its neighboring city, City, are the two major components for the Cagayan de Oro-Iligan Corridor, the fastest developing area in Northern .

To the west, provides ferry and container ship transportation. East of the city, flat cultivated coastal land gives way to steep volcanic hills and mountains providing the waterfalls and cold springs for which the area is well known.

Iligan falls within the third type of climate wherein the seasons are not very pronounced. Rain is more or less evenly distributed throughout the year. Because of its tropical location the city does not experience cold weather. Neither does it experience strong weather disturbances due to its geographical location (being outside the typhoon belt) And also because of the mountains that are surrounding the city.

Rural Transit (RTMI) and Super 5 Transport are the dominant public land transportation in this City. The Integrated Bus and Jeepney Terminal (IBJT) caters trips to and from Cagayan de Oro City and various parts of Misamis Oriental, while the Southbound Bus and Jeepney Terminal caters trips to and from , , , various parts of Lanao del Norte and . The public mode of transportation withinin this city is by Jeepneys, Taxis, and Pedicabs. There is also the famous "Tartanillas" (calesas) that is also a public mode of transportation which serves through Barangay Pala-o and Barangay Tambacan. Passenger vans are also available for the various municipalities in Lanao del Norte and Lanao del Sur.

Iligan City is served by located in the nearby municipality of Baloi. served the city for many years before stopping services in 1998 due to the Asian financial crisis. After a decade of not serving the city, PAL subsidiary returned to the city with four weekly flights to Manila and three weekly flights to Cebu. Both services began on , .

Iligan is predominantly Christian (93.61%). Iliganons are the mixture of the Maranao and Cebuano population with a minority of Tagalog and some other cultural minorities and immigrants from other places.It is not only rich in natural resources and industries but it is also the home of a mix of cultures, Maranaos of Lanao del Sur, Higaonons of Bukidnon, and many settlers and migrants from other parts of the country. It is known for its diverse culture.

is the major language in the city (about 93%). The rest speak Tagalog, , , Ilocano, , and . The majority of the population can speak and understand English.

Iligan City is a chartered city and thus is independent from Province of Lanao del Norte. Registered voters of the city cannot vote for provincial candidates unlike its nearby towns that make up the provinces.

Iligan City is governed mainly by city hall, composed of one mayor, one vice-mayor and twelve councilors. Each official is elected publicly to 3-year terms. The day to day administration of the city is handled by a city administrator.

The economy of Iligan is largely based on heavy industries. After the construction of Maria Cristina (Agus VI) Hydroelectric Plant by National Power Corporation (NPC, NAPOCOR) in 1950, the city experienced rapid industrialization and continued until the late 1980s. The largest steel plant in the country, National Steel Corporation (NSC), was also established during that period (Specifically in 1962). [Prof. Geoffrey G. Salgado, [http://www.iligan.gov.ph/index.php?option=com_content&task=view&id=426 Iligan: A History of the Phenomenal Growth of an Industrial City] , Iligan City Official Website]

During the , the city experienced severe slowdown in terms of economic growth. A good number of industrial plants are closed, notably the National Steel Corporation. Its closure also created a domino effect on its ancillary industries, causing some companies to close shop while putting others in grave financial distress. [Maricar T. Manuzon, [http://www.philippinebusiness.com.ph/archives/magazine/vol11-2004/11-1/agenda.htm A Giant Awakens] , Philippine Business Magazine]

The city made its economic revival on the reopening of the National Steel Corporation, named Global Steelworks Philippines, Inc on 2004. Thus, putting the city back on its track. [Genalyn D. Kabiling, [http://www.mb.com.ph/issues/2004/02/04/MAIN200402041232.html National Steel Plant reopens] , Manila Bulletin Online]

Lessons learned from the crisis, the city government makes its move to diversify the economy. Among those are tourism, agriculture, and agribusiness. In One Town, One Product (OTOP) Project of Department of Trade and Industry, the city is producing abaca and its product lines. [ [http://www.otopphilippines.gov.ph/microsite.aspx?rid=11&provid=28&prodid=97 Abaca of Iligan City] , One Town, One Product Philippines.]

The current industrial plants in operation and their locations are:

Iligan has its beginnings in the village of Bayug, 2.5 kilometers north of the present Poblacion. It was the earliest pre-Spanish settlement of native sea dwellers, known as Maragats. The monotony of indigenous life in the territory was broken when in the later part of the 16th century, the inhabitants of Iligan were subdued by the Visayan migrants from the island kingdom of .

In the accounts of Jesuit historian Fr. , the Mollucan King of invaded Panglao. This caused Panglaons to flee in large numbers to Dapitan, . In Dapitan, the surviving Prince of Panglao, , received Legazpi's expedition in 1565. Later, Pagbuaya's son Manook was baptized . The Christianized Manook subdued the Higaunon village in Bayug and established it as one of the earliest Christian settlements in the country. The settlement survived other raids from other enemies, and, because of their faith in God and in their patron saint, Saint , the early Iliganons moved their settlement from Bayug to Iligan. [Camilo P. Cabili, [http://www.iligan.gov.ph/index.php?option=com_content&task=view&id=472&Itemid=1 Early History] , Iligan City Official Website]

The name Iligan is from the word "iligan" or "ilijan," meaning "fortress of defense" against frequent attacks by pirates and other hostile Mindanao tribes.

In 1850, because of floods, Don , then Iligan's governadorcillo, built another fort and moved the poblacion of the old Iligan located at the mouth of Tubod River west of the old market to its present site.

A stone fort called Fort St. was built in 1642 where Iliganons sought refuge during raids by bandits. But again, the fort sank due to floods. Another fort was built and this was named or Cota de Iligan.

The Spaniards abandoned Iligan in 1899, paving the way for the landing of the American forces in 1900. In 1914, under the restructuring of Moroland after the end of the Moro Province (1903-1913), Iligan became a municipality composed of eight barrios side-by-side the municipal district of Mandulog. After enjoying peace and prosperity for about 40 years, Iligan was invaded by Japanese forces in 1942. The liberation in Iligan by the Philippine Commonwealth forces attacked by the Japanese held sway in the city until 1944 to 1945 when they left Iligan suddenly. On , , the city held a Commonwealth Day parade to celebrate the end of Japanese atrocities and occupation. [Prof. Leonor Buhion Enderes, [http://www.iligan.gov.ph/index.php?option=com_content&task=view&id=387&Itemid=353 Japanese Occupation in Iligan City] , Iligan City Official Website]

Using the same territorial definition as a municipality, Iligan became a chartered city of Lanao del Norte on , . It was declared a first class city in 1969 and was reclassified as First Class City "A" on , by virtue of Presidential Decree No. 465. In 1983, Iligan was again reclassified as a highly urbanized city.

The City of Iligan has one state university and 7 private colleges specialized in Engineering Information Technology, Health Services, Maritime Science, Business and Administration, Primary and Secondary Education, and Arts and Social Sciences. Among these educational institutions is , one of the few autonomous external campuses of Main Campus, acknowledged as one of the best universities in Philippines.

Capitol College of Iligan, Inc., more popularly known as Iligan Capitol College (ICC), is a private, non-sectarian, co-educational institution of learning which was established in 1963 by the late Engr. Sesenio S. Rosales and Madame Laureana San Pedro Rosales. It was registered with the Securities and Exchange Commission (SEC) in .

is known as the oldest school in the Lanao area, founded as a catechetical center way back 1914 by Fr. Felix Cordova, S.J. It was formally established in 1915 as Escuela de San Miguel in honor of the patron saint, St. Michael the Archangel. Now on its active bid to become the city's first Private Catholic University, Saint Michael's College of Iligan currently offers 6 disciplines: Business Administration, Hotel and Restaurant Management,Engineering and Information Technology, Nursing, Criminology, Education, Arts and Sciences and the Basic Education. It also offers the TESDA Ladderized Courses and the education - related Graduate Studies Program. SMC is currently expanding its infrastructures to support the growing needs of the academic community and even to the City of Iligan.

The colleges primarily focused on Medicine and Health Services are and Mindanao Sanitarium and Hospital College.

Iligan is also known as City of Majestic Waterfalls because there are about 20 waterfalls within the city. The famous waterfall in the city, as well as the city's famous landmark, is . It is also the primary source of electric power of the city, harnessed by Agus VI Hydroelectric Plant. Other famous waterfalls in the are , Mimbalut Falls, , and . Some waterfalls like are inaccessible to vehicles, which requires trekking for several hours to two days (in case of ) to the destination.

The city is also famous for . It is well-known for icy-cold and crystal-clear springs flow freely to the swimming pools. There are around five spring resorts along the highway which is easily accessible by land to all locals and tourists.