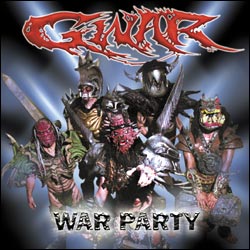 "War Party" is a 2004 album by the band . It was released on October 26, 2004, being the band's first album in . The album was released to positive reviews and has been said by the band to be GWAR's best selling album in years. Fact|date=April 2007

After "Violence Has Arrived", switched labels from Metal Blade to DRT Entertainment. War Party was released October 26, 2004 and continues the decidedly more metal focus reintroduced in "Violence Has Arrived". "War Party" is the most political GWAR album since "America Must Be Destroyed" tackling such subject matter as the 2004 American election and the war in Iraq in such songs as "Bring Back the Bomb", "Krosstika", "War Party", "The Reaganator" and "You Can't Kill Terror". has said "...basically GWAR pledges support to the powers who support the war, and we make such a right-wing statement that the right wing would be ashamed to have us."

GWAR still has more gratuitous violent imagery in "Womb With a View", "Fistful of Teeth" and "Bonesnapper" and retains some trademark silliness in the Beefcake hollered French punk song "The Bonus Plan". "War Party" was supported in fall 2004 by the tour. The Enhanced CD portion contains a music video for "Womb With A View," which shows a plethora of concert footage from their Spring 2004 tour.

especially likes this album, as it continues with a heavier musical direction for the band. According to interviews with Todd Evans () and Dave Brockie, "War Party" was selling very well, and was attracting new GWAR fans, as well as seeing old ones come back.

Although not following a true story per se, unlike many of the band's previous efforts, there seems to be an ongoing concept throughout the album about a fictional named "The War Party", with policies dedicated especifically to the eradication of the human race by supporting global war and hatred. Under the "Krosstika", a symbol crossing the and the nazi ("Two great hates that hate great together"). The band refers to the Krosstika on their next studio album, "", and will often play this song towards the beginning of their concerts.

Though the War Party itself has disbanded (according to GWAR lore), the band will continue to play songs from this album in concert, as the album is among the band's favorites.