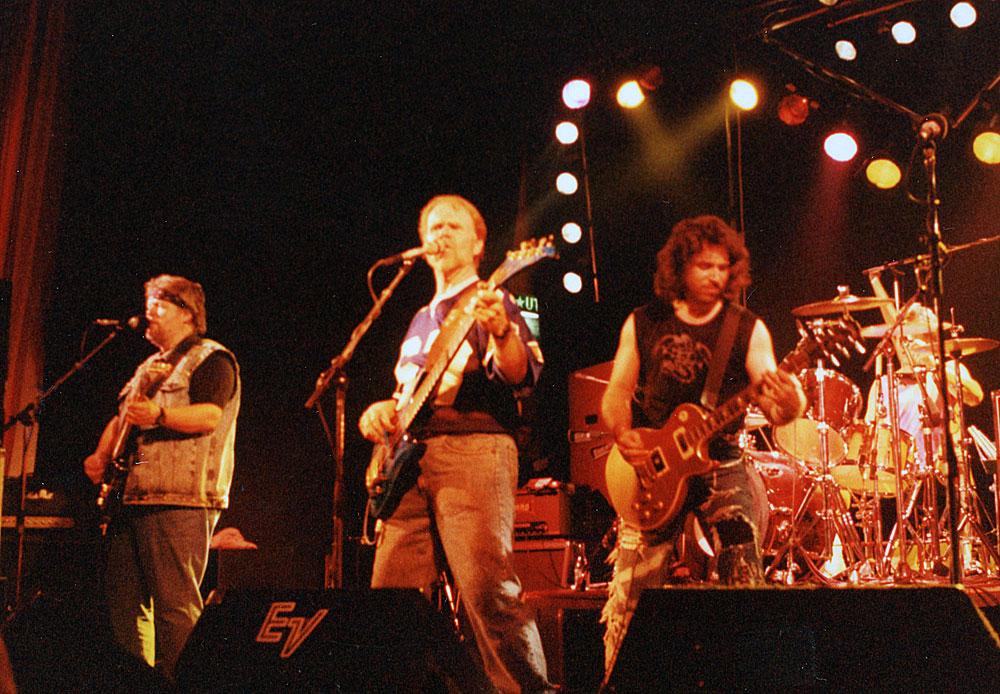 Bachman-Turner Overdrive (frequently known as "BTO") is a group from , , that enjoyed a string of hit albums and singles in the 1970s. The Bachman family name is pronounced /IPA|bækmæn/ and the band uses this pronunciation when referring to themselves. [cite web|url= http://www.youtube.com/watch?v=vjE0xsXdsOM&feature=related|title= Randy Bachman of BTO with Elvis -28/05/07- "TCB"] The alternative pronunciation of Bachman as /IPA|bɑkmæn/, especially on American radio, became so widespread that the band no longer made the correction and both pronunciations have become acceptable.

The precursor to BTO was the band , which was formed in 1971 by and Chad Allan, both formerly of , and drummer Robin "Robbie" Bachman. Randy initially planned to just produce the album for Allan, but eventually both he and Robbie stepped in to provide much of the instrumental work. When the record label wanted them to tour, Randy called fellow Winnipeg bassist/vocalist C. F. “Fred” Turner to perform in the band's scheduled gigs.

Brave Belt's self-titled first album did not sell particularly well, and Allan left the band shortly after the supporting tour started. Not having a lead vocal replacement ready, Turner was asked to be a full-time member and sing lead for the recording of "Brave Belt II" in 1972. "Brave Belt II" also failed to achieve major chart success, and in mid-1972 their tour in support of the album was canceled halfway through. But Turner's influence had started to make itself felt, as the band morphed from pure country-rock to a harder, guitar-heavy sound featuring Turner's gruff, powerful voice. ["Driving Music: Bachman-Turner Overdrive," article at www.allpar.com]

Chad Allen appears as a vocalist on two "Brave Belt II" songs, but was essentially out of the band for any supporting tours. During this period, was added to the group as a second guitarist because the band had felt their three-piece arrangement was too restrictive. They landed a new recording deal from , one which Randy Bachman proclaimed as a pure stroke of luck:

After their demo tape had been rejected 26 times, Bachman was prepared to tell the other band members that they would no longer be able to remain on salary, “and they had to go and get the dreaded day jobs”. Fate took a different course – in April 1973, Charlie Fach of Mercury Records returned to his office after a trip to France to find a stack of unplayed demo tapes waiting on his desk. Wanting to start completely fresh, he took a trash can and slid all the tapes into it except one, which missed the can and fell onto the floor. Fach then picked up the tape and noticed Bachman's name on it. He remembered talking to him the previous year and had told Bachman that if he ever put a demo together to send it to him. While playing the first song on the 7-1/2 inch reel, "Gimme Your Money Please," Fach called Bachman to tell him that he wanted to sign the band. [Interview track on "King Biscuit: Bachman-Turner Overdrive", King Biscuit Flower Hour Records]

At this point the band’s demo tape was still called "Brave Belt III". Fach convinced the band that a brand new name was needed; one that capitalized on the name recognition of the band members. The band had already mulled over using their surnames (à la ). While on their way back from a gig in , the group had spotted a copy of a trucker’s magazine called "" at a truckstop, after which Turner wrote "Bachman-Turner Overdrive" and the initials "B.T.O." on a napkin. The rest of the band decided the addition of "Overdrive" was the perfect way to describe their music. ["Bachman-Turner Overdrive Biography" at sing365.com]

BTO released their eponymous self-titled first album in May 1973. The album broke through in the US via border towns such as and Buffalo, and stayed on the charts for many weeks despite lacking a true hit single. It was a precursor to their upcoming success.

Their second album, "", was released in December of the same year and became a massive hit in the US and their native Canada. It also yielded two of their best known hit singles, "Let it Ride" and "Takin’ Care of Business." Randy had already written the core of "Takin’ Care of Business" some eight years earlier as "White Collar Worker" while in , but that band had felt it was not their type of song. It reappeared in BTO's repertoire during the supporting gigs for the first album primarily, as Randy put it, "to give Fred Turner a chance to rest his voice." Randy had heard DJ Darryl Burlingham say the day before a gig, 'We're takin' care of business on C-Fox radio,' and he decided to insert the lyrics "takin' care of business" into the chorus where "white collar worker" previously existed.

Tim Bachman left the band in early 1974, shortly after the release of "Bachman-Turner Overdrive II". There are differing accounts of the reasons for his departure. Many state he left because of personal and lifestyle issues...that he was getting married and/or wanted to study record engineering and production. But in a 2002 interview, brother Robbie said, "He was basically asked to leave. He wasn't BTO caliber [and] it was difficult to rely on him. I guess the band was conflicting with his whole life."

During the supporting tour for "BTO II", Tim was replaced by , who had been in the -based band . The first album with the modified lineup, 1974’s "", became a huge hit and reached #1 on the Canadian and U.S. album charts. It included the #1 single "You Ain’t Seen Nothing Yet" and AOR favorite "Roll On Down the Highway". The band continued to steadily produce successful albums through the mid-1970s including "Four Wheel Drive" and "Head On" (both 1975). Each of these albums produced a hit single: "Hey You" (from "Four Wheel Drive") and "Take it Like a Man" (from "Head On"). The latter song featured a guest appearance by , who wailed away on his piano. "Head On" also featured the jazzy Randy Bachman composition "Lookin' Out for #1," which garnered considerable airplay on both traditional rock and soft rock stations.

The first BTO compilation album, "", was released in 1976 and featured songs from each of the band's first five studio albums.

"Freeways", a sixth studio album released in 1977, would signal the initial unraveling of the band. The song "My Wheels Won't Turn" was BTO's first single since their first album that didn't chart. Turner was reportedly so unhappy with "Freeways" that he refused to have his photograph taken face-on for the cover art because he felt he had become a "sideman." Only two of the album's eight tracks featured Turner on lead vocals, and there was only one Turner composition, "Life Still Goes On (I'm Lonely)." The remaining lead vocals and compositions are all credited to Randy Bachman. [BTO band bio accompanying the album review for "Rock n' Roll Nights" at overdoseoffingalcocoa.blogspot.com]

Randy Bachman left the group following "Freeways". His initial intention was to temporarily disband while he worked on a solo project, "but it was decided by management it wouldn't work." He conceded, "we also ran out of common interests." Randy was replaced by bassist , formerly of . Original bassist Turner moved to rhythm guitar with Thornton becoming the primary lead guitarist. Clench and Turner shared lead vocal duties. Even though this lineup included drummer Robbie Bachman, the band had to record and tour only as "BTO" because of an agreement with Randy who wanted to retain the rights to his surname for his solo career. The re-structured BTO released a pair of albums (1978’s "" and 1979’s "") before calling it quits in the summer of 1979.

Randy recorded the solo album "Survivor" in 1978, then went on to form the short-lived in 1979 and the even shorter-lived Union in 1980 (with Turner).

BTO reunited in 1983. Their line-up for their first studio LP in five years consisted of Randy and Tim Bachman, Fred Turner, and former Guess Who drummer . Younger brother Robbie Bachman declined to participate after business and trademark disagreements with Randy and the others. The new album, simply titled "Bachman-Turner Overdrive", was released in 1984 on Charlie Fach’s new "" label. , their drum tech, contributed keyboards to their stage shows. In 1986 they released a live album culled from their 1985 tour called "Live! Live! Live!", and were the opening band for the new -fronted . This plum opening slot was done by a trio lineup of Randy, Tim, and Garry Peterson since Fred Turner had been unavailable when the group was first contacted by Van Halen’s management. Chapman later stepped in as drummer for Peterson after the latter severely injured his leg while playing during the group’s downtime on the road.

After the Van Halen tour ended, Randy split and Tim kept going briefly as BTO (see lineups below). The others reluctantly gave him permission to do so in order to get his way out of debt.

In 1988, the 1974-1977 line-up (Randy, Fred, Blair, Robbie) reformed and again took to the road. But by late 1991, Randy Bachman had quit again and was replaced by . (Murray had been in Tim Bachman's 1987-88 touring incarnations of the band.) This reconstituted version of BTO proved to be its most enduring as they toured together from 1991 until December 2004. They have not played together since then, but have not announced plans of disbanding. "", released in 1996, was their last album to contain any new material. In an interview in 2004, Rob Bachman stated that BTO was working on nine new songs but all has been quiet in the BTO camp since late 2004.

BTO has been recognized in many music circles for carrying on the torch of guitar-heavy rock and roll at a time when soft rock was dominating the Top 40 charts and progressive/glamor acts (such as Yes, and ) were getting an increasing share of FM radio play. As stated on XMFan.com: "A shift of styles in popular music in the mid-1970s had quickly caused old-fashioned guitar rock-and-roll to face near extinction on the Top 40 charts. Songs like 'Lovin' You' by and 'The Morning After' by were topping the pop charts with alarming regularity, leaving many rock-and-roll fans feeling like they were left out in the cold without a jacket." [Preface to Rob Bachman interview at XMFan.com]

As drummer Robbie Bachman added: "We were basically fans of all kinds of music, but really liked the old kind of rock-and-roll...like Elvis and the funky kinds of rock bands like The Stones. Luckily for us, Creedence had just called it quits, and we came out with three- and four-chord rock-and-roll with Fred Turner's gruff voice. So it was basically this working man's kind of rock-and-roll." [Rob Bachman interview at XMFan.com]

An achievement/trophy in the video game is named "The Bachman-Turner Award" in tribute to the band. It is awarded for staying in overdrive for 90 seconds.