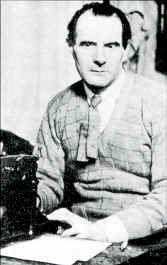 Seán O'Casey (Irish: Seán Ó Cathasaigh) (30 March 1880 &ndash; 18 September 1964) was a major Irish dramatist and ist. A committed irish republican and , he was the first Irish playwright of note to write about the working classes.

His plays are particularly noted for the sympathetic treatment of female characters.

O'Casey was born John Casey [ [http://www.geocities.com/dorsetstreet/life.html Bio of O'Casey] ] in a house at 85 Upper Dorset Street, in the northern inner-city area of Dublin. It is commonly thought that he grew up in the tenement world in which many of his plays are set. In fact, his family belonged to that social class that was known as "shabby genteel". He was a member of the , being confirmed at St John The Baptist Church in Clontarf

O'Casey's father, Michael Casey, died as the result of a spinal injuryFact|date=March 2008 when Seán was just six years of age. The family lived a peripatetic life thereafter, moving from house to house around north Dublin. As a child, Seán suffered from poor eyesight, which interfered somewhat with his early education. He left school at the age of fourteen and worked at a variety of jobs, including a nine-year stint as a railwayman.

From the early 1890s, Seán and his older brother, Archie, put on performances of plays by and in the family home. Seán also got a small part in Boucicault's "The Shaughraun" in the , which stood on what was to be the site of the .

As his interest in the Irish nationalist cause grew, O'Casey joined the in 1906 and learned the . He also learned to play the Irish pipes and was a founder and Secretary of the . He joined the and became involved in the , which had been established by to represent the interests of the unskilled labourers who inhabited the Dublin tenements.

In March 1914 he became General Secretary of 's , which would soon be run by James Connolly. On 24 July 1914 he resigned from the Irish Citizen Army.

O'Casey and the Abbey

O'Casey's first accepted play, "," was performed on the stage of the in 1923. This was the beginning of a relationship that was to be fruitful for both theatre and dramatist, but that ended in some bitterness.

The play deals with the impact of revolutionary politics on Dublin's slums and their inhabitants. It was followed by "" (1924) and "The Plough and the Stars" (1926), probably O'Casey's two finest plays.

The former deals with the impact of the on the working class poor of the city, while the latter is set in Dublin in 1916 around the "", which was, in fact, a middle-class affair, not a reaction by the poor.

"The Plough and the Stars", an anti-war play, was misinterpreted by the Abbey audience as being anti-nationalist and resulted in scenes reminiscent of the riots that greeted Synge's "" in 1907. Regardless, O'Casey gave up his job and became a full-time writer.

"Juno and the Paycock" was successfully filmed by . In 1959 O'Casey gave his blessing to a musical adaptation of the play by American composer . The musical, retitled "Juno", was a commercial failure, closing after only 16 Broadway performances. It was also panned by some critics as being too "dark" to be an appropriate musical, a genre then almost invariably associated with light comedy. However, the music, which survives in a cast album made before the show opened, has since been regarded as some of Blitzstein's best work. Although endorsed by O'Casey, he, at age 79, made no effort to cross the Atlantic to contribute any input to the production or even to view it in its brief run prior to its closing. Despite general agreement on the brilliance of the underlying material, the musical has defied all efforts to mount any successful revival of it.

In 1929, rejected O'Casey's fourth play, "The Silver Tassie" for the Abbey. Already upset by the violent reaction to "The Plough and the Stars", O'Casey decided to sever all ties with the Abbey, and moved to England, where he spent the rest of his life.

These plays have never had the same critical or popular success as the early trilogy. After he wrote "" (1949), which is perhaps his most beautiful and exciting work. From "The Bishop's Bonfire" (1955) O'Casey's late plays are studies on the common life in Ireland, "Irish microcosmos", like "The Drums of Father Ned" (1958).

In these late years, O'Casey put his creative energy into his six-volume "Autobiography" too.

In 1965, his autobiography "Mirror in my House" (the umbrella title under which the six autobiographies he published from 1939 to 1956 were republished, in two large volumes, in 1956) was turned into a film based on his life called "". The film was directed by and featured , , , , and .

Online
* [http://en.internationalism.org/wr/292_1916_rising.html Seán O’Casey and the 1916 Easter Rising]
* [http://www.todayinliterature.com/biography/sean.ocasey.asp O'Casey at Today in Literature]
* [http://www.faber.co.uk/book_detail.html?bid=35895&clid= O'Casey on the Faber and Faber website] - link to 'About O'Casey' by Victoria Stewart
* [http://www.artandculture.com/arts/artist?artistId=766 O'Casey at Art and Culture]
* [http://dspace.dial.pipex.com/town/parade/abj76/PG/pieces/ocasey/sean_ocasey.shtml Bibliography]
* [http://www.threemonkeysonline.com/threemon_article_sean_o_casey_irish_drama_portrait_of_the_artist.htm Seán O'Casey - Portrait of the artist as an outsider]