Mandelbrodt
This article is about the dessert. For other uses, see Mandelbrot (disambiguation). 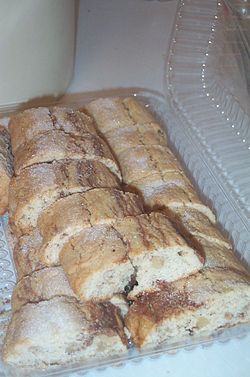 A sliced loaf of Mandelbrot

Mandelbrodt, Mandelbrot, or anglicized to Mandelbread, is a dessert associated with Eastern European Jews. The Yiddish word mandelbrodt literally means almond bread. It is made by forming dough into a loaf, baking it, slicing the loaf into oblong cookies and baking again. The crunchy, dry cookies were popular in Eastern Europe among rabbis, merchants and other itinerant Jews as a staple dessert that kept well.[1]

Its precise origin is unknown, as is its historic relationship with "biscotti" – an Italian term that means 'twice baked'. Mandelbrodt and biscotti are both crispy, but mandelbrodt is more substantial.

Each baker has his own variation; common additions include walnuts, cinnamon, chocolate chips or bits of fruit. Mandelbrodt is called kamishbrot in Ukraine. In the United States, the two terms are often used interchangeably.[2]