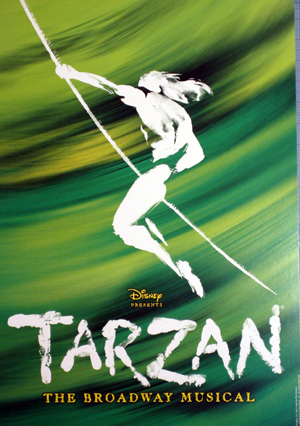 "Tarzan" is a stage musical based on the Disney film of the same name and the story by . The music is composed by , and the book by . Designed and directed by , the production was choreographed by Meryl Tankard with Aerial Movement by Pinchon Baldinu, with lighting design by and sound design by John Shivers.

The musical opened at the on Broadway on , , making it the only production without an out-of-town tryout. Danton Burroughs, grandson of Edgar Rice Burroughs, attended the opening night gala. This production was nominated for a Tony award for Best Lighting Design of a Musical (Natasha Katz). Due to poor reviews and ticket sales, the show closed on , after 35 previews and 486 performances.

The musical follows the plot of the Disney film, with few minor changes.

In 1899 off the coast of , a father, his wife, and infant son escape a burning ship and arrive in the unexplored jungles of Africa, where they build themselves a in which to live ("Two Worlds"). Meanwhile, a couple named Kerchak and Kala lose their son to a named Sabor. As they move to another nest area, Kala hears an infant crying and follows it back to the treehouse. She investigates the treehouse and discovers that it is ransacked and the parents of the baby dead. As she looks around the treehouse, she notices a trail of large, bloody cat-like pawprints marked across the floor. Frightened, she rears back and finds a recent photograph of the family together. Kala hears more infantile crying and finds the human baby in an overturned basket. Immediately reminded of her own lost child, Kala feels remorse for the baby boy. Suddenly Sabor appears out of nowhere, hungry for human flesh. After a short chase, Kala and the baby escape the treehouse and run into the jungle to rejoin the gorillas. Upon arriving, Kala's mate Kerchak, also the leader of the gorillas, does not like the baby because he is human. Kerchak orders Kala to abandon the child, but Kala protests. Kerchak sympathizes with Kala and allows her to keep the boy, but he makes it clear that the child is hers and not his. Kala names the child Tarzan and treats him as one of her own ("You'll Be in My Heart").

As time passes, Tarzan, now ten years old, tries to fit in with the other gorillas ("Son of Man"). He makes friends with a gorilla named Terk and an elephant named Tantor. Eight years later, Tarzan grows up into an adult and is attacked by Sabor the leopard. Tarzan kills Sabor and earns the respect of Kerchak. Suddenly a gunshot is heard from far away. As the gorillas leave, Tarzan follows the sound and sees three humans: Professor Porter, his daughter Jane, and their hunter guide Clayton. Tarzan saves Jane from a giant man eating spider and tries to communicate with her as he can't speak English. Meanwhile, Terk and some of his gorilla friends stumble upon the campsite of the Professor, Jane, and Clayton. Mesmerized by the many strange human objects, the gorillas begin to destroy the entire camp ("Trashin' the Camp"). Jane and Tarzan return to the camp and find it ransacked by Tarzan's friends. After some introductions, Kerchak angrily appears. Tarzan and the gorillas leave as Prof. Porter and Clayton arrive.

Back in the jungle, Kerchak instructs the gorillas to stay away from the strangers. Tarzan protests, saying that the humans are not dangerous, but Kerchak is unwilling to believe him. Kala tries to make Tarzan understand the danger, but instead Tarzan angrily asks her why she never told him that there were others who look like him.

After some time, Tarzan secretly returns to the camp and is introduced to Prof. Porter and Clayton. Together, the three teach Tarzan about the human world ("Strangers Like Me"). Repeatedly Tarzan is asked about the whereabouts of the gorillas, but he is unwilling to disclose their location because of Kerchak. One day while returning to the campsite, Tarzan sees everything being packed up. He asks Jane what is happening, and she tells him that a boat has come to take the three back to England. Tarzan does not understand why Jane has to leave, but Clayton explains that if he leads them to the gorillas they would not have to leave. Tarzan leads them to Kala and Terk, but Kerchak appears and is hostile to Tarzan and his company. As the others flee, Kerchak scolds Tarzan and he angrily flees. Kala senses the sorrow in Tarzan and decides to show him the treehouse where she found him. There Tarzan finds the picture of his mother, father, and himself as a baby. Now knowing where he must go, Tarzan puts on his father's old formal suit and joins up with Jane.

However, the gorillas are attacked by Clayton and Kerchak is murdered by Clayton's but Tarzan interferes. Tarzan is about to kill Clayton, but Professor Porter tells him not to, that they can handle it a more peaceful way and Tarzan lets him go. Tarzan becomes the leader of the gorillas.

Tarzan says goodbye to Jane and Porter as they board the ship, but Jane decides that she loves him and returns.

The curtain closes with a kiss by Tarzan and Jane.

* as Tarzan
* as Jane
* as Kerchak
* as Kala
*Chester Gregory II as Terk
*Timothy Jerome as Professor Porter
*Donnie R. Keshawarz as Clayton
*Alex Rutherford and as Young Tarzan

The first international "Tarzan" production opened on , in in the Circustheatre in near . Phil Collins was present at the opening night.

The second European production of "Tarzan", and the first independent production (Scheveningen, Broadway, Hamburg, and US Tour were all produced by Disney) openened in Kristianstad, at the Kristianstad Theatre on , , with Emil Sigfridsson as the title character.

The third European production of "Tarzan" will open in Hamburg, at the Neue Flora Theater on , . It will star and Elisabeth Hübert who won the roles of Tarzan and Jane on the German casting show "Ich Tarzan, Du Jane".

A revamped tour version has been announced to debut in January 2009 in at the Theatre of the Stars. The new production will feature the same music and book, but will be directed and choreographed by Lynne Taylor-Corbett, with scenic design by Kenneth Foy, aerial design by Paul Rubin and lighting design by Ken Billington. Following the Atlanta engagement, the tour of "Tarzan" will play at the American Musical Theatre of San Jose, CA, at the San Jose Center for the Performing Arts (February); North Carolina Theatre in Raleigh, NC, at the Progress Energy Center (March); and Dallas Summer Musicals in Dallas, TX, at the Music Hall at Fair Park (April).

Casting is yet to be announced.

Productions are currently in development for , , and . [http://disney.go.com/theatre/index.html#aboutus "Tarzan" plans productions for Asia]