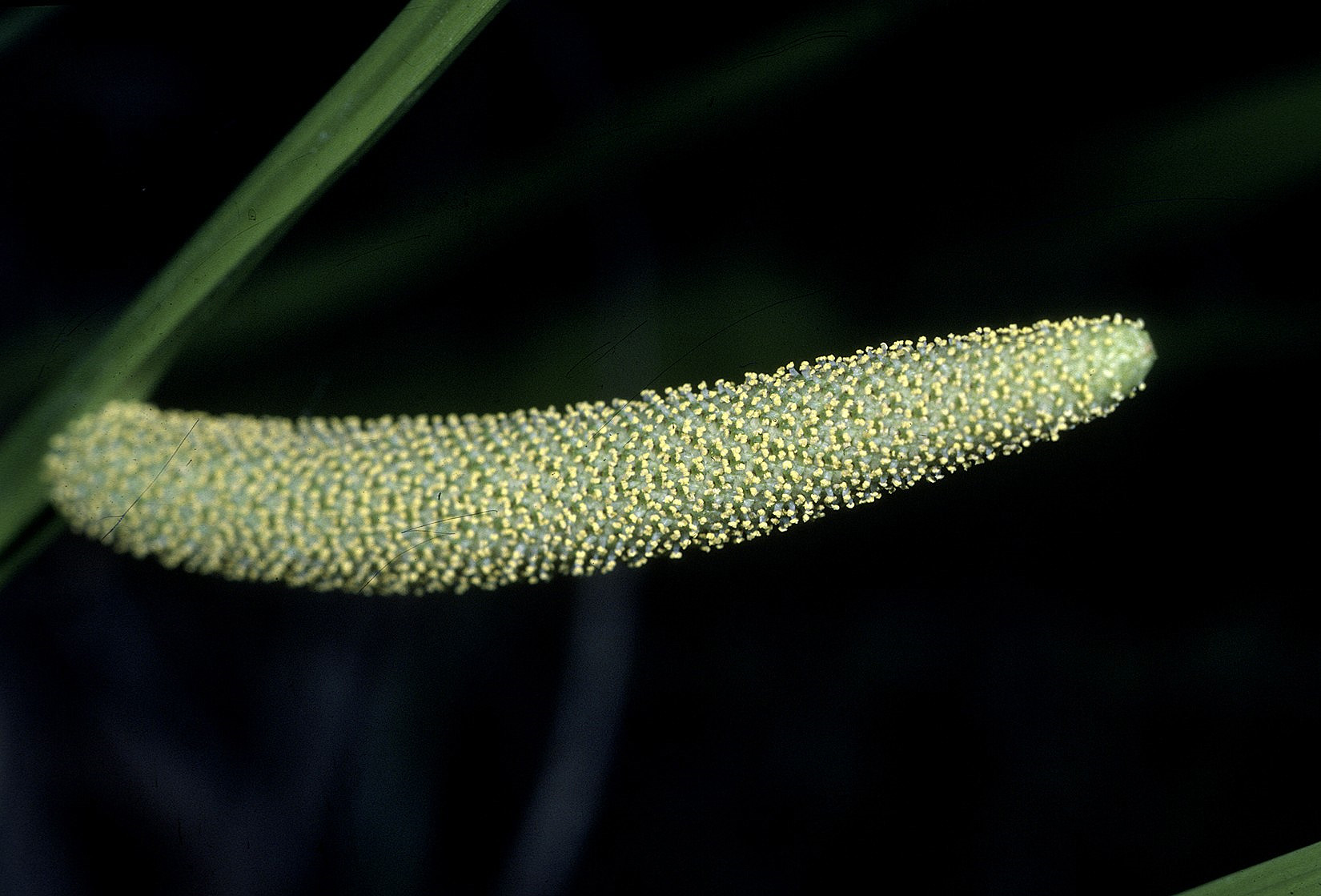 "Acorus" is a of s. This genus was once placed within the family (aroids), but more recent classifications place it in its own family Acoraceae and order Acorales, of which it is the sole genus of the oldest surviving line of monocots. The exact relationship of Acorus to other monocots, however, is still debated by scientists. Some studies indicate that it is placed in a lineage (the order Alismatales), that also includes aroids (Araceae), , and several families of aquatic monocots (e.g., Alismataceae, ). Common names include Calamus and . It is known as "vasambu" in .

The name 'acorus' is derived from the Greek word 'acoron', a name used by , which in turn was derived from 'coreon', meaning 'pupil', because it was used in herbal medicine as a treatment for of the .

The genus is native to and northern and eastern , and in southern Asia and from ancient cultivation. The known wild populations are except for some s in eastern Asia, while the cultivated plants are sterile s, probably of hybrid origin between the diploid and tetraploid forms.

Although the family Acoraceae was originally described in 1820, since then "Acorus" has traditionally been included in Araceae in most classification systems, as in the . The family has recently been resurrected as molecular systematic studies have shown that "Acorus" is not closely related to Araceae or any other family, leading plant systematists to place the genus and family in its own order. This placement currently lacks support from traditional plant morphology studies, and some taxonomists still place it as a subfamily of Araceae, in the order .

The system recognizes order Acorales, distinct from the Alismatales, and as the to all other monocots.

The inconspicuous s are arranged on a lateral (a thickened, fleshy axis). Unlike aroids, there is no (large bract, enclosing the spadix). The spadix is 4-10 cm long and is enclosed by the foliage. The bract can be ten times longer than the spadix. The leaves are linear with entire margin.

The parallel-veined leaves of some species contain ethereal oils that give a sweet scent when dried. Fine-cut leaves used to be strewn across the floor in the Middle Ages, both for the scent, and for presumed efficacy against pests.

In older literature and on many websites, there is still much confusion, with the name "Acorus calamus" equally but wrongfully applied to "Acorus americanus".

"Acorus" from Europe, and Japan have been planted in the .

Both triploid and tetraploid calamus contain , but diploid does not contain any. Asarone is a possible precursor in the synthesis of the psychedelic phenethylamine TMA-2. The chemical itself is reportedly without activity at doses up to 70 mg.

Calamus and products derived from calamus (such as its oil) were banned in 1968 as food additives and medicines by the .

In antiquity in the Orient and Egypt, the rhizome was thought to be a powerful aphrodisiac. In Europe "Acorus calamus" was often added to wine, and the root is also one of the possible ingredients of . Among the northern Native Americans, it is used both medicinally and as a ; in addition, the root is thought to have been used as an among the northern Native Americans. In high doses, it is hallucinogenic; Calamus has been used as a "street drug alternative".

The calamus has long been a symbol of male love. The name is associated with a Greek myth: , a son of the river-god , who loved , the son of and . When Karpos drowned, Kalamos was transformed into a reed, whose rustling in the wind was interpreted as a sigh of lamentation.

The plant was a favorite of (who called it sweet flag), and also of , who added a section called "The Calamus Poems", celebrating the love of men, to the third edition of "" (1860). In the poems the calamus is used as a symbol of love, lust, and affection. It has been suggested that the symbology derives from the visual resemblane of the reed to the erect human penis.

The name "Sweet Flag" refers to its sweet scent (It has been used as a strewing herb) and the wavy edges of the leaves which are supposed to resemble a fluttering flag.

Etymology of the word Calamus

s of the word "Calamus" are found in both Greek ("", meaning "reed") and ("kalama", meaning "reed" and "pen" as well as a sort of rice) &mdash; strong evidence that the word is older than all three languages and exists in their parent language, . The Arabic word "qalam" (meaning "pen") is likely to have been borrowed from one of these languages in antiquity, or directly from Indo-European itself.

From the Latin root "calamus", a number of modern English words arise:
* , meaning "squid", via the "calamarium", "ink horn" or "pen case", as reeds were then used as writing implements;
* "calumet", another name for the Native American , which was often made from a hollow reed;
* , a medieval -like instrument (whose sound is produced by a vibrating reed mouthpiece);
* "chalumeau" register, the lower notes of a 's range (another )