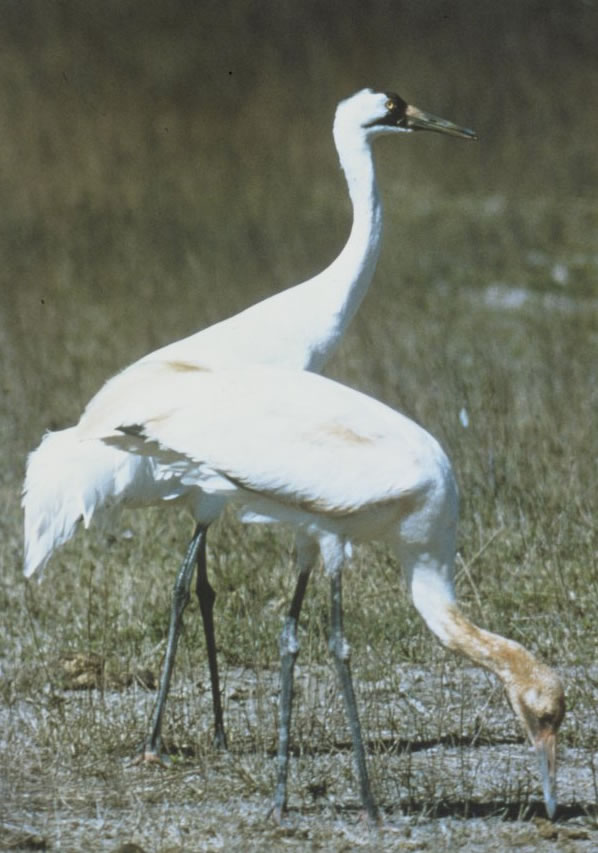 The Whooping Crane ("Grus americana"), the tallest n bird, is an crane species named for its whooping sound and call. Along with the , it is one of only two cranes species found in North America. The whooping crane's lifespan is estimated to be 22 to 24 years in the wild. [ [http://www.fws.gov/northflorida/WhoopingCrane/whoopingcrane-fact-2001.htm whooping crane Status and Fact Sheet.] U.S. Fish and Wildlife Service. Retrieved on: ]

The whooping cranes' breeding habitat is the of the ; the only known remaining nesting location is in in , and the surrounding area. With the recent Whooping Crane Eastern Partnership Reintroduction Project, whooping cranes nested naturally for the first time in 100 years in the in Central , . They nest on the ground, usually on a raised area in a marsh. The female lays 1 to 3 eggs, usually in late-April to mid-May. The blotchy, olive-colored eggs average 2½ inches in breadth and 4 inches in length (60 by 100 mm), and weigh about 6.7 oz (190 g). The incubation period is 29-35 days. Both parents brood the young, although the female is more likely to directly tend to the young. Usually no more than one young bird survives in a season. The parents often feed the young for 6-8 months after birth and the terminus of the offspring-parent relationship occurs after about 1 year.

Breeding populations winter along the Gulf coast of , near Corpus Christi on the , , Isla San Jose, andportions of the Lamar Peninsula and Welder Point, which is on the eastside of San Antonio Bay.

Among the many potential nest and brood predators include ("Ursus americanus"), ("Gulo luscus"), ("Canis lupus"), ("Vulpes fulva"), ("Lynx canadensis"), ("Haliaeetus leucocephalus"), and ("Corvus corax"). Adults have very few predators, as even s are unlikely to be able to take one down. The is the only natural predator known to be both powerful and stealthy enough to prey on adult whooping cranes away from their nesting grounds.

The whooping crane is endangered mainly as a result of habitat loss. At one time, the range for these birds extended throughout midwestern North America. In , the wild population consisted of 21 birds. Since then, the population has increased somewhat, largely due to conservation efforts. As of April 2007 there were about 340 whooping cranes living in the wild, and another 145 living in captivity. The whooping crane is still one of the rarest birds in . The confirmed that 266 whooping cranes made the migration to Aransas National Wildlife Refuge in 2007.

These birds forage while walking in shallow water or in fields, sometimes probing with their bills. They are omnivorous and slightly more inclinced to animal material than most other cranes. In their wintering grounds, this species feeds on various s, s, (such as ), , s and aquatic s. Potential foods of breeding birds in summer include s, , s, smaller s, , s, , , other aquatic s, , s, s, aquatic s, , s, and s. Waste is an important food for migratory birds such as the whooping crane.

The whooping crane was declared endangered in 1971. Attempts have been made to establish other breeding populations in the wild.
* One project by the and the was initiated in 1975 involved cross-fostering with s to establish a second self-sustaining flock. Although 85 chicks from the 289 whooping crane eggs transplanted into Sandhill Crane nests learned to migrate [http://www.fws.gov/Alamosa/whoopingcranes.html] , the whooping cranes failed to mate with other whooping cranes due to on their Sandhill foster parents; the project was discontinued in 1989 [http://www.savingcranes.org/species/whooping.cfm] .
* A second involved the establishment of a non-migratory population near by a cooperative effort led by the U.S. and Canadian Whooping Crane Recovery Team in 1993 [http://www.whoopingcrane.com/FLOCKSTATUS.HTM#FloridaNonSynopsis] . As of December 18, 2006, this population numbers about 53 birds [http://www.whoopingcrane.com/FLOCKSTATUS.HTM#HowMany] ; while problems with high mortality and lack of reproduction are addressed no further birds will be added to the population.
* A third attempt has involved reintroducing the whooping crane to a new flyway established east of the Mississippi river. This project uses isolation rearing of young whooping cranes and trains them to follow an ultralight aircraft, a method of re-establishing migration routes pioneered by and Joe Duff when they led Canada Geese in migration from Ontario, Canada, to Virginia and South Carolina in 1993. [ [http://www.whoopingcrane.com/FLOCKSTATUS.HTM#FloridaNonSynopsis Florida Whooping Crane Non-Migratory Flock (Synopsis)] ] The non-profit organization which is responsible for the ultralight migrations is Operation Migration, [ [http://www.operationmigration.org Crane Migration] Operation Migration.] and the larger group, WCEP (the Whooping Crane Eastern Partnership), oversees all aspects of the Eastern Introduced Flock.

The Operation Migration cranes are costume reared from hatching, taught to follow an , fledged over their future breeding territory in Wisconsin, and led by ultralight on their first migration from Wisconsin to Florida; the birds learn the migratory route and then return, on their own, the following spring. This reintroduction began in fall 2001 and has added birds to the population in each subsequent year (Except that in 2007, a disastrous storm took the lives of all of the 2007 yearlings.).

As of September, 2007, there were 52 surviving whooping cranes in the Eastern Migratory Population (EMP), including 2 of the 4 yearlings released in Wisconsin and allowed to migrate on their own (Direct Autumn Release (DAR)). Fourteen of these birds had formed seven pairs; two of the pairs nested and produced eggs in spring 2005. The eggs were lost due to parental inexperience. In spring 2006 some of the same pairs have again nested and are incubating eggs. Two whooping crane chicks were hatched from one nest, on , . Their parents are both birds that were hatched and led by ultralight on their first migration in 2002. At just 4 years old these are young parents. The chicks are the first whooping cranes hatched in the wild, of migrating parents, east of the Mississippi, in over 100 years. One of these young chicks was unfortunately predated on the . The other young chick, a female, has successfully migrated with her parents to Florida. As noted above, in early February, 2007, 17 yearlings in a group of 18 were killed by the . All birds in that flock were believed to have died in the storms, but then a signal from one of the transmitters, "Number 615", indicated that it had survived. The bird was subsequently relocated in the company of some s. It died in late April from an as yet unknown cause, possibly related to the storm trauma. Two of the 4 DAR Whooper chicks from 2006 were also lost due to predation.

In Wood Buffalo National Park, the counted 73 mating pairs in 2007. They produced 80 chicks, of which 40 survived to the fall migration, and 39 completed the migration to Aransas National Wildlife Refuge.

* [http://digitalcommons.unl.edu/biosciornithology/19/ Natural History article by Paul Johnsgard (1982)]
*
*
*
*
*
* Famous Photographer Thomas Mangelsen made the film "Flight of the Whooping Crane" to help bring them back from the brink of extinction. [http://www.mangelsen.com/store/util/biography?Args= Images of Nature Online]