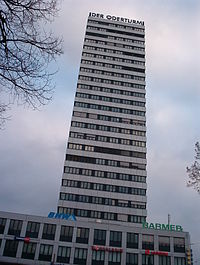 The Oderturm can be seen from neighboring Poland 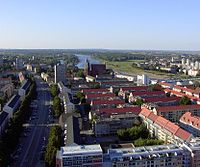 A view of Frankfurt from the top-floor cafe 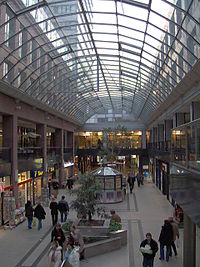 Der Oderturm is a 24-storey high-rise office building in Frankfurt (Oder), Germany, built between 1968 and 1976 (when the city was in East Germany). It is arguably the tallest office building in Brandenburg, with a mobile telephony mast reaching 95 m; however, its roof height of 89 m is 1 m less than that of the Stern-Plaza in Potsdam, built in 1998. (The 107-m hall containing Tropical Islands and the 161-m steam generator at Schwarze Pumpe power station are taller structures, though they lack occupied floors.)

The tower was designed by a collective under architects Hans Tulke and Paul Teichmann and built in part by Free German Youth (FDJ) work brigades; construction lasted nearly eight years. It was planned as an office building, but when it opened it housed a 274-bed dormitory for workers in the Frankfurt semiconductor plant, as well as a 160-bed Youth Tourist Hotel (Jugendtourist-Hotel), similar to a youth hostel, but geared towards organized meetings such as the Whitsuntide meetings of the FDJ with its Polish counterpart, the ZSMP, of which the 1977 meeting, not long after the opening of the hotel, was the most significant. The ground level of the tower complex was made up of two three-storey buildings with an open-air shopping passage between them, which included a 400 m2 supermarket (Kaufhalle) and the popular Oderland-Grill restaurant, while the 23rd floor featured a panoramic cafe.

After German reunification, the building was refurbished in 1992 to 1994, following the plans of architect Monika Krebs, when it opened as the Oderturm. The tower became an office building, the cafe was removed, and the lower buildings were transformed, with new construction, into an enclosed shopping mall. A large illuminated sign was added to the roof, making the Oderturm an easily identifiable landmark. A cafe, Turm24, returned to the 24th floor in 2000.