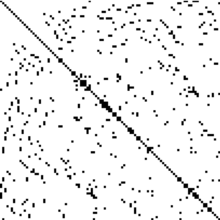 A sparse matrix obtained when solving a finite element problem in two dimensions. The non-zero elements are shown in black.

In the subfield of numerical analysis, a sparse matrix is a matrix populated primarily with zeros (Stoer & Bulirsch 2002, p. 619). The term itself was coined by Harry M. Markowitz.

Conceptually, sparsity corresponds to systems which are loosely coupled. Consider a line of balls connected by springs from one to the next; this is a sparse system. By contrast, if the same line of balls had springs connecting each ball to all other balls, the system would be represented by a dense matrix. The concept of sparsity is useful in combinatorics and application areas such as network theory, which have a low density of significant data or connections.

When storing and manipulating sparse matrices on a computer, it is beneficial and often necessary to use specialized algorithms and data structures that take advantage of the sparse structure of the matrix. Operations using standard dense matrix structures and algorithms are slow and consume large amounts of memory when applied to large sparse matrices. Sparse data is by nature easily compressed, and this compression almost always results in significantly less computer data storage usage. Indeed, some very large sparse matrices are infeasible to manipulate with the standard dense algorithms.

The native data structure for a matrix is a two-dimensional array. Each entry in the array represents an element ai,j of the matrix and can be accessed by the two indices i and j. For an m×n matrix, enough memory to store at least (m×n) entries to represent the matrix is needed.

Substantial memory requirement reductions can be realized by storing only the non-zero entries. Depending on the number and distribution of the non-zero entries, different data structures can be used and yield huge savings in memory when compared to a native approach.

DOK represents non-zero values as a dictionary mapping (row, column)-tuples to values. This format is good for incrementally constructing a sparse array, but poor for iterating over non-zero values in sorted order. One typically creates the matrix with this format, then converts to another format for processing

LIL stores one list per row, where each entry stores a column index and value. Typically, these entries are kept sorted by column index for faster lookup. This is another format which is good for incremental matrix construction. See scipy.sparse.lil_matrix.

COO stores a list of (row, column, value) tuples. Ideally, the entries are sorted (by row index, then column index) to improve random access times. This is another format which is good for incremental matrix construction. See scipy.sparse.coo_matrix.

The Yale Sparse Matrix Format stores an initial sparse m×n matrix, M, in row form using three one-dimensional arrays. Let NNZ denote the number of nonzero entries of M. The first array is A, which is of length NNZ, and holds all nonzero entries of M in left-to-right top-to-bottom (row-major) order. The second array is IA, which is of length m + 1 (i.e., one entry per row, plus one). IA(i) contains the index in A of the first nonzero element of row i. Row i of the original matrix extends from A(IA(i)) to A(IA(i+1)-1), i.e. from the start of one row to the last index before the start of the next. The third array, JA, contains the column index of each element of A, so it also is of length NNZ.

For example, the matrix

is a three-by-four matrix with six nonzero elements, so

CSR is effectively identical to the Yale Sparse Matrix format, except that the column array is normally stored ahead of the row index array. I.e. CSR is (val, col_ind, row_ptr), where val is an array of the (left-to-right, then top-to-bottom) non-zero values of the matrix; col_ind is the column indices corresponding to the values; and, row_ptr is the list of value indexes where each row starts. The name is based on the fact that row index information is compressed relative to the COO format. One typically uses another format (LIL, DOK, COO) for construction. This format is efficient for arithmetic operations, row slicing, and matrix-vector products. See scipy.sparse.csr_matrix.

CSC is similar to CSR except that values are read first by column, a row index is stored for each value, and column pointers are stored. I.e. CSC is (val, row_ind, col_ptr), where val is an array of the (top-to-bottom, then left-to-right-bottom) non-zero values of the matrix; row_ind is the row indices corresponding to the values; and, col_ptr is the list of val indexes where each column starts. The name is based on the fact that column index information is compressed relative to the COO format. One typically uses another format (LIL, DOK, COO) for construction. This format is efficient for arithmetic operations, column slicing, and matrix-vector products. See scipy.sparse.csc_matrix. This is the traditional format for specifying a sparse matrix in MATLAB (via the sparse function).

A bitmap image having only 2 colors, with one of them dominant (say a file that stores a handwritten signature) can be encoded as a sparse matrix that contains only row and column numbers for pixels with the non-dominant color.

Matrices with reasonably small upper and lower bandwidth are known as band matrices and often lend themselves to simpler algorithms than general sparse matrices; or one can sometimes apply dense matrix algorithms and gain efficiency simply by looping over a reduced number of indices.

By rearranging the rows and columns of a matrix A it may be possible to obtain a matrix A’ with a lower bandwidth. A number of algorithms are designed for bandwidth minimization.

A very efficient structure for an extreme case of band matrices, the diagonal matrix, is to store just the entries in the main diagonal as a one-dimensional array, so a diagonal n×n matrix requires only n entries.

The fill-in of a matrix are those entries which change from an initial zero to a non-zero value during the execution of an algorithm. To reduce the memory requirements and the number of arithmetic operations used during an algorithm it is useful to minimize the fill-in by switching rows and columns in the matrix. The symbolic Cholesky decomposition can be used to calculate the worst possible fill-in before doing the actual Cholesky decomposition.

There are other methods than the Cholesky decomposition in use. Orthogonalization methods (such as QR factorization) are common, for example, when solving problems by least squares methods. While the theoretical fill-in is still the same, in practical terms the "false non-zeros" can be different for different methods. And symbolic versions of those algorithms can be used in the same manner as the symbolic Cholesky to compute worst case fill-in.

Both iterative and direct methods exist for sparse matrix solving.

Iterative methods, such as conjugate gradient method and GMRES utilize fast computations of matrix-vector products Axi, where matrix A is sparse. The use of preconditioners can significantly accelerate convergence of such iterative methods.