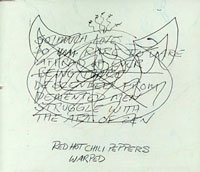 
"Warped" is a song by the from their 1995 album "". It was released as the first single from the album, alongside a which met controversy over frontman ' kiss with guitarist at the end. "Warped" is a departure from the songs of preceding album "". Instead the song is closer to a heavy metal sound with influences. Both lyrically and musically, it is one of the Red Hot Chili Peppers' darkest and hardest-sounding songs. It boasts a very energetic and fast riff through most part of the song, similar to that of "Give It Away" from the previous album.

It is the first track on "One Hot Minute", beginning with an unusually quiet intro, before suddenly kicking into a very heavy, crunching riff. The song notably ends with a mellow, melodic outro that seems to come out of nowhere. Kiedis' vocals are distorted and echoed throughout, and contrast dramatically with the rapping present on the band's previous material, especially on their more fast-paced songs such as this; short lines are stretched to fill an entire bar. The musical style is of an unpredictable and unsettling nature, which is generally maintained throughout the entire album. The overall structure of "Warped" can be associated with a drug-induced trip. The lyrics describe Kiedis' confused feelings about drugs, starting already in the first lines with: "my tendency/for dependency/is offending me".

During live performances of "Warped", the band sometimes played a sample from the song "Three Days" by (former band of Dave Navarro) at the end of the song.