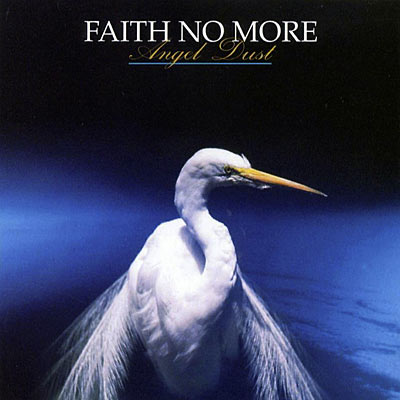 "Angel Dust" is the fourth by American rock band , first released through Slash on , in and the . It's the final studio album with long time guitarist and the second to feature on vocals however it is the first album in which he had an influence on the band's sound, [cite web |url=http://negele.org/db/index.php3?band=2&year=1993&month=8&id=932 |title=Last in, First Out? |accessdate=2008-08-30 |last=Hobbs |first=Mary Anne |date=August 1993|publisher="Select"] as Patton hadn't previously had input on the musical composition of the albums predecessor, "The Real Thing", as it had all been composed and recorded prior to his joining.

It remains as Faith No More's highest-selling album outside the United States in which, as of July 2007, the album has sold 664,000 copies there. The album and subsequent tour were very successful in Europe where it went Platinum for sales of more than 1 million copies and Gold in Australia for selling more than 35,000 copies. Worldwide sales are around 3.0 million copies for this record.

Following the success of their previous album, "The Real Thing" and the subsequent tour that followed, Faith No More took a break for about a year and a half off before beginning work the follow-up, "Angel Dust". During this time Mike Patton went back with his high-school band to record their eponymous début album.

They decided not to "play it safe" and re-do their last album and went off in a different direction musically,

Roddy stated that he chose the name because it "summed up what [they] did perfectly" in that "it's a really beautiful name for a really hideous drug ] and that should make people think."

" single, was originally going just the five members faces on a black background but wasn't well received by the band in this manner. Mike Bordin described the situation in these words:

cquote|That was a thing the record company really tried to foist on us. They really tried to fuck with our layout, and sent us these fucking pictures of us, just our heads. It was like this, they wanted us to have a poster inside the record consisted of our five heads on a black background, everything was black, the whole inside, and it's like, 'Fuck you.' We're going to make our cover, we made our record, we produced it our way, we wrote our songs, we played them our way, it sounds like us.

A large portion of the songs were written between Billy Gould, Roddy Bottum and Mike Bordin, as with many of their previous albums but, unlike their previous albums Mike Patton, who had previously only written the lyrics on "The Real Thing", has input on its musical construction. Some attributed this to its difference in sound to its predecessors, however, Mike Patton credits it to being "better at playing what [they] hear in [their] heads" and went on to say:

In a trend carried on from when their vocalist at the time, Chuck Mosley, lived in while the rest of the band resided in the they would record demo tapes of the songs and exchange them between each other then send them to Jim Martin for him to work on his own the guitar arrangements, which he always did separately before sending them back for approval. [cite web |url=http://negele.org/db/index.php3?band=2&year=1992&month=9&id=1079 |title=Faith No More: Get the Funk Out |accessdate=2008-07-01 |author= Lee Sherman |date= September 1992 |work= |publisher=Guitar Magazine]

The lyrics for "Angel Dust" were written for the most part by vocalist Mike Patton. He got his inspiration for the lyrics from many places including questions from the , fortune cookies and late-night TV, from which he wrote "Land of Sunshine" and "Caffeine" during a sleep deprivation experiment.Songs with lyrics written by someone other than Patton include "" by , about oral sex, [cite web |url=http://negele.org/db/index.php3?band=2&year=1993&month=6&day=15&id=890|title=Heavy Metal Homo |accessdate=2008-06-22 |author= |date=, |publisher=|quote=It was a pretty fun thing to write, knowing that Mike was going to have to put himself on the line and go up on-stage and sing these vocals.] "Everything's Ruined"; which was written by Mike Patton and Billy Gould, "Kindergarten"; by Mike Patton and Roddy Bottum, and "Jizzlobber"; by Jim Martin and Mike Patton which, according to Patton is about his fear of going to although it has also been said to be about a porno star by Billy Gould.

For the recording of "Angel Dust" Faith No More, as well as self producing, once again had Matt Wallace, who had produced all their studio recordings to date with them. They started recording in January 1992 and originally went in studio to record a total of 17 songs, including the covers of "Midnight Cowboy" "Easy" and the rerecording of "As the Worm Turns". However after writing two more while in studio, a total of 19 were recorded. [The Making of Angel Dust, Billy Gould interview. . Retrieved Date|2008-02-26] At the time they had not officially titled them, so they were known by these s, some of which were continued to be used later as set list titles:

There were many samples used on "Angel Dust", to the point of being called a "gratuitous"

Faith No More started the tour to promote "Angel Dust" shortly after the albums completion on the European leg of the Use Your Illusion Tour with and ,

Reviews of "Angel Dust" were generally favourable. One critic write that the album is "one of the more complex and simply confounding records ever released by a major label"

There were several different bonus discs released with various editions and formats of the album.