After the fall of communism political and social changes caused an increase in the number of airlines operating in the airport. Notably its reconstruction, started in 2005 and terminated in 2008, made possible a relevant increase in the processing capacity of the airport, which saw its number of passengers per year doubling from 2005 to 2010, when it reached 1.5M. The airport currently has a capacity to process 1.8M passengers per year and it is thought that such capacity will suffice to handle the expected increase given the visa liberalization for the citizens of Albania in the area of Schengen, which started at the end of 2010.[2] 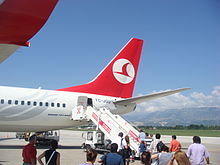 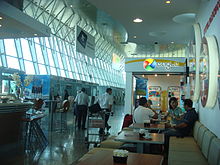 The air traffic equipment and facilities of the airport have been heavily modernised following investments by Tirana International Airport SHPK, a consortium led by Hochtief AirPort. Hochtief assumed management of the airport on April 23, 2005, for a 20-year concession period.[3]

The concession included the construction of a completely new passenger terminal and various infrastructure improvements, that included the construction of a new access road, new parking lots, and a bridge on the old airport access road.[4] The expansion resulted in an increased number of passengers per annum, estimated in 1.5M passengers for 2009.[5][6] The number of passengers effectively increased to more than 1.5M in 2010.[7]

The Tirana International Airport Nënë Tereza has the following amount of passengers:

Internet service through WiFi connections is available free of charge to customers of Tirana International Airport and car rentals are available to visitors next to the exit at the Arrival Area. Rinas Express operates an hourly bus shuttle between 6:00am and 6:00pm from the airport to Skanderberg Square and viceversa. The bus costs 250 lek. A taxi service is also available from ATEx shpk and costs around 2000 lek (17 EUR).

Shops, and boutiques in Tirana's international airport include:

The following companies are owner of the Tirana International Airport Nënë Tereza[11]: