The Colt Delta Elite is a modified Colt M1911A1, series 80 configuration, chambered for the 10mm Auto. It is similar to the M1911 in design and operation. Colt manufactured both stainless steel and blued versions with 8-round magazines. A Delta Gold Cup model was also offered for target competition. The stainless steel Government model version has recently been reintroduced.

It is also credited as being the first weapon since the ill-fated Bren Ten that sparked a genuine interest in the 10mm round. The 10mm round has had a resurgence with outdoorsmen and as a defense round. Colt has announced the re-introduction of the Delta Elite at the 2008 SHOT Show. This new generation is generally similar to the previous version. The "new" Delta Elites will be manufactured with the traditional barrel/bushing arrangement. Colt Customer Service stated they had a lack of acceptable accuracy problem with the "bull" bushingless barrel setup. That was the cause of the delay in the Delta Elite's production schedule. The new Delta Elite pistols was released March 31, 2009.

The Delta Elite is a standard M1911A1 design, with a few differences from the latest Series 80 derivative of that pistol. It carries the rowel "Commander" type hammer of that pistol and the same overall features of the 1911A1 that have made it so popular with its users. However, the Delta Elite carries a stiffer double recoil spring to handle the increased slide velocity of the 10mm Auto round. Unlike the .400 Corbon, the 10mm can easily exceed the pressure levels of the .357 Magnum, thus stressing the original design's limitations, unless care is given. Many gunsmiths have their own modifications which they feel adjust the level of felt recoil of the Delta Elite. Some of the very first Delta Elites had a tendency to suffer slide rail stress cracks. This was quickly addressed by removing that section of rail above the slide stop cutout. This was more of an issue of allowing the weapon to flex. 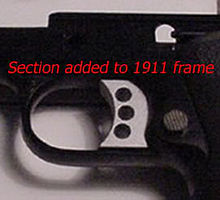 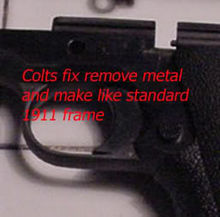 Metal removed to allow the frame to flex

A Delta Elite on display at the National Firearms Museum. Police issue from Hartford, CT.