Martin Dibelius (September 14, 1883 – November 11, 1947) was a German theologian and a professor for the New Testament at the University of Heidelberg. 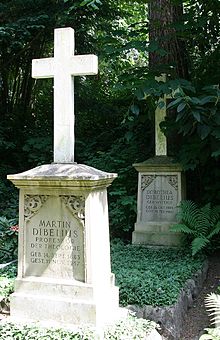 His grave in Heidelberg

Martin Dibelius was born in Dresden, Germany in 1883. With Rudolf Bultmann, he helped define a period in research about the historical Jesus characterized by skepticism toward the possibility of describing Jesus with historical authority. In this capacity he is often considered one of the pioneers along with Bultmann of New Testament form criticism, a highly analytical review of literary forms within the New Testament. Studying at multiple universities he eventually found himself New Testament exegesis and criticism at Heidelberg University,one of the world's oldest established centers of study. He is well known for portraying Jesus' Sermon on the Mount as reflecting ideals that are impossible to live up to in this fallen world. He died in Heidelberg in 1947.