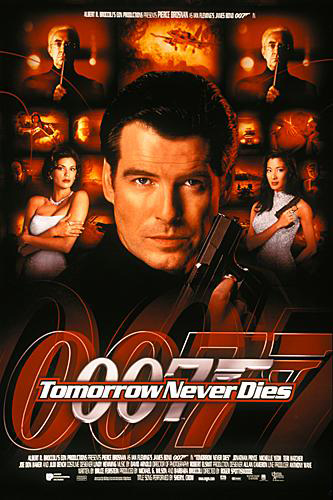 "Tomorrow Never Dies", released in 1997, is the eighteenth in the series, and the second to star as MI6 agent James Bond. was credited as writing the screenplay, although it received input from several writers, and it was directed by . It follows Bond as he tries to stop a from engineering world events and starting World War III.

The film was produced by and , and was the first James Bond film made after the death of producer . "Tomorrow Never Dies" performed well in the box office despite mixed reviews. While its domestic box office surpassed "GoldenEye", [ [http://www.boxofficemojo.com/showdowns/chart/?id=jamesbondvs.htm James Bond Vs. Himself ] ] it was the only Pierce Brosnan Bond film not to open at number one at the box office since it opened the same day as "Titanic".

MI6 sends James Bond into the field to spy on a terrorist arms bazaar on the Russian border. Via television, MI6 and the British military identify several wanted men, including American "techno-terrorist" Henry Gupta, who is buying a GPS encoder made by the American military. The British launch a missile attack on the arms bazaar, but then Bond points out there are two Soviet nuclear torpedoes mounted on an , the destruction of which poses potential local radioactive contamination. With the missile already in flight and unable to be aborted, Bond hijacks the L-39 and flies it to safety after a fight with its co pilot, who tries to strangle him. Despite the missile destroying most of the terrorists and weaponry, Gupta escapes with the encoder.

Media baron , head of the Carver Media Group Network (CMGN), begins his plans to use the encoder to provoke war between China and the United Kingdom. As the existing Chinese leadership is not receptive to giving Carver Media Group Network the exclusive broadcast rights in their country, Carver wants to use the war to eliminate them in favor of politicians more friendly to his plans. Using the encoder Gupta deviates the frigate HMS "Devonshire" off-course in the , where Carver's stealth ship and its crew plan to steal some of its missiles. Carver's henchman, Stamper, sinks the frigate with a sea drill and shoots down a Chinese fighter jet sent to investigate the British presence, and then the men aboard the boat kill the survivors with Chinese airplane guns. Thinking they have been attacked by the Chinese, Admiral Roebuck reluctantly gives M forty-eight hours to investigate before the Royal Navy retaliates and attacks.

M sends Bond to investigate Carver after Carver Media releases news with critical details hours before these have become known, and MI6 noticed a spurious signal from one of his CMGN s when the frigate was sunk. Bond travels to , a Chinese spy on the same case, are captured by Stamper and taken to the CMGN Vietnam bureau; they escape and begin collaborating.

They inform the Royal Navy and the Chinese air force to explain what is happening, then find and board Carver's in to prevent him firing the stolen British cruise missile at . During the battle aboard the stealth ship, Bond sets off an explosive, damaging part of the ship and exposing it on radar, enabling the Royal Navy to attack it, but Wai Lin is captured. Bond captures Gupta to use as his own hostage, but Carver kills Gupta, claiming he has outlived his contract. Bond leads a large battle against the crew and Stamper, and Carver is killed by his own sea drill after trying to kill Bond on his own. As Bond begins to start the process of destroying the warhead, Stamper shows that he has held Wai Lin hostage. A fight ensues when he tries to drown her. Bond traps him in the missile firing mechanism and leaves him to die, while saving Wai Lin as the stealth ship is destroyed by the missile. Bond and Wai Lin survive amidst the wreckage as HMS "Bedford" searches for them.Carver's Stealth Ship bears remarkable resemblances to the manufactured by and the manufactured by for the .

After the success of "" in reviving the Bond series, there was pressure to recreate that success in its follow-up. This pressure came both from , which had recently been sold to billionaire , who wanted the release to coincide with their public stock offering,

The producers were unable to get , the director of "GoldenEye", to return; his agent saying "Martin just didn't want to do two Bond films in a row". Instead, was chosen in September 1996. The story had its roots in a treatment written by , although what influence it eventually had is unknown. , who had worked on "GoldenEye", penned the initial script which was then passed to Spottiswoode who reworked it. He gathered seven in to brainstorm, eventually choosing to perform rewrites. The script was also worked on by Dan Petrie Jr and David Campbell Wilson before Feirstein, who retained the sole writing credit, was brought in for a final polish.

As had been the case previously, with no novels remaining unadapted, an entirely original story was required. The scriptwriting process was finished very late and after lengthy disputes. Spottiswoode said that MGM had a script in January 1997 revolving round being returned to the Chinese, which happened in July; this couldn't be used for a film opening at the end of the year, so they had to start "almost from scratch at T-minus zero!"

The title was inspired by the ' song "". The eventual title came about by accident: one of the potential titles was "Tomorrow Never Lies" (referring to the "Tomorrow" newspaper in the story) and it was faxed to MGM. However, through an error it became "Tomorrow Never Dies", which MGM liked so much they insisted on using. The title was the first not to have any relation with Fleming.

Teri Hatcher was three months pregnant at the shooting start, by her then-husband, ; her publicist stated the pregnancy did not affect the production schedule. [cite news |first=Elizabeth |last=Johns |title=Teri Hatcher Pregnant |url=http://www.eonline.com/news/article/index.jsp?uuid=1d3ea90a-591b-4ae0-8578-2479539b09fd | |publisher= |date= |accessdate=2007-01-05] Hatcher later regretted playing Paris Carver, saying "It's such an artificial kind of character to be playing that you don't get any special satisfaction from it." [cite news |title=Hatcher regrets Bond movie |url=http://uk.news.yahoo.com/27112006/364/hatcher-regrets-bond-movie.html | |publisher= |date= |accessdate=2007-01-05] According to Brosnan, screentested for the role but "the fools said no."

The role of Elliot Carver was initially offered to (who also had been offered a role in ""), but he turned it down.

When Götz Otto was called in for casting, he was given twenty seconds to introduce himself. Saying, "I am big, I am bad, and I am German", he did it in five. [cite news |title=Promi-Porträt: Götz Otto |url=http://www.kwick.de/magazin/promi_portraet_goetz_otto_.9014.html | |publisher= |date= |accessdate=2007-01-06]

filming began on 18 January 1997 with directing; they filmed the pre-credits sequence in the French and moved on to to film the scenes where the prepares to engage the Chinese. The main unit began filming on 1 April. They were unable to use the , which they had constructed from an abandoned Rolls-Royce factory for "GoldenEye", as was using it for "", so instead they constructed s in another derelict industrial site nearby. They also used the at .

They planned to film some of the scenes on location in , , and had been granted a visa. This was later rescinded, two months after planning had begun, forcing filming to move to , . Some claim the Chinese government put pressure on Vietnam to do this, because they were unhappy with the story involving corrupt Chinese generals doing the bidding of a media tycoon. However, Bond spokesman Gordon Arnell claimed the Vietnamese were merely unhappy with crew and equipment needed for , with a Vietnamese official saying it was due to "many complicated reasons". [cite news |coauthors="Rush and Molloy" |title=China Resists Western Efforts to Bond |url=http://www.klast.net/bond/tndnews1.html#yeoh | publisher= |date= |accessdate=2007-01-06]

The sequence took three weeks to film, with car park being used to simulate (although the final leap was filmed on location

During filming, there were reports of disputes on set. The "" reported that Spottiswoode and Feirstein were no longer on speaking terms and that crew members had threatened to resign, with one saying "All the happiness and teamwork which is the hallmark of Bond has disappeared completely." This was denied by Brosnan who claimed "It was nothing more than good old creative argy-bargy", with Spottiswoode saying "It has all been made up...Nothing important really went wrong." Spottiswoode did not return to direct the next film; he said the producers asked him, but he was too tired. Apparently, Brosnan and Hatcher feuded briefly during filming due to her arriving late onto the set one day. The matter was quickly resolved though and Brosnan apologized to Hatcher after realizing she was pregnant and was late for that reason.

Barbara Broccoli chose to score "Tomorrow Never Dies" on a recommendation from prolific James Bond films composer John Barry. [cite video | people =Macnee, Patrick (Narrator) | year = | title =The Bond Sound: The Music of 007 | url = | medium = DVD (Documentary) | location = | publisher =] Arnold had come to Barry's attention through his successful cover interpretations in "", which featured major artists performing the former James Bond title songs in new arrangements. The film's score combined with a recognisably Barry-inspired 'classic Bond' sound – notably Arnold borrowed from Barry's score for "From Russia with Love". For the music for the indoor car chase sequence, Arnold enlisted the help of the band , who had worked with him before on "Shaken and Stirred". The soundtrack's reception was good, with Filmtracks describing it as "an excellent tribute to the entire series of Bond score",

The critical reception of the film was mixed, with the film review collection website "" giving it a 52% Fresh approval,

The title song sung by was nominated for a for "Best Original Song - Motion Picture" and a for "Best Song Written Specifically for a Motion Picture or for Television". The film received four nominations for s, with Brosnan winning "Best Actor". It also won a MPSE Golden Reel Award for "Best Sound Editing - Foreign Feature" and a BMI Film Music Award. [cite web| title=Awards for Tomorrow Never Dies | publisher= |url=http://www.imdb.com/title/tt0120347/awards | accessdate=2007-01-14]

Appearances in other media

"Tomorrow Never Dies" was the first of three Bond films to be adapted into books by then-current Bond novelist, . Benson's version is expanded from the screenplay including additional scenes with Wai Lin and other supporting characters not in the film. The novel traces Carver's background as that of media mogul Lord Roverman's son. Carver blackmails him into suicide and takes over his business. [cite interview| url=http://commanderbond.net/article/2339| title=The Raymond Benson CBn Interview (Part IV)| work=CommanderBond.net| accessdate=2008-02-24] The novel also attempts to merge Benson's series with the films, particularly continuing a middle of the road approach to John Gardner's continuity. Notably it includes a reference to the film version of "You Only Live Twice" where he states that Bond was lying to Miss Moneypenny when he said he had taken a course in languages. This was done to counter the scene in "Tomorrow Never Dies" where Bond is unable to read a Chinese keyboard. [This scene from the film does not appear in the novelisation.] But this contradicts Benson's previous book "" in which Bond is able to speak fluent Cantonese. "Tomorrow Never Dies" also mentions , although it states that Felix had worked for Pinkertons Detective Agency which is thus exclusive to the literary series. Subsequent Bond novels by Benson were affected by "Tomorrow Never Dies", specifically Bond's weapon of choice being changed from the Walther PPK to the Walther P99.