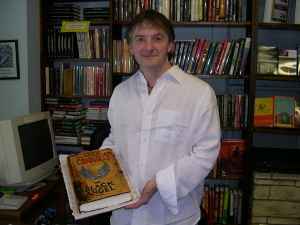 John Connolly (born , , ) is an Irish writer who is best known for his series of novels starring Charlie Parker. His first novel, "Every Dead Thing", was met with critical acclaim; it was nominated for the and went on to win the 2000 for Best First Private Eye Novel (he is the first author outside of the US to have won the award). Connolly's introduced readers to the Charlie Parker, a former police officer hunting the killer of his wife and daughter. Connolly has since written a further 5 books in the popular Parker series and a non-Parker thriller, as well as venturing outside of the crime genre with the publication of first, an of ghost stories and later, a novel about a young boy's coming-of-age journey through a fantasy realm during England. Several of his works are currently in development; the earliest to appear to audiences will be partially based on the short story "The New Daughter", and stars and , previously seen in the acclaimed film "". Connolly is also known to tour extensively to promote the launch of his books. In 2007, Connolly made book-store appearances in Ireland, United Kingdom, United States, Australia, New Zealand, Hong Kong and Taiwan to promote "The Unquiet". Before becoming a full-time , Connolly had worked as a journalist, a barman, a local government official, a waiter and a gofer at department store in London. After graduating with a in English from Trinity College, Dublin and a M.A. in from , he spent five years working as a journalist for "The Irish Times" newspaper. He quickly became frustrated with the profession, and began to write "Every Dead Thing" in his spare time. Connolly continues to contribute articles to the paper, most notable of which have been a series of interviews with other established authors.

Although Connolly's novels fall under the crime genre, his stories have become increasingly tinged with supernatural overtones. In the Parker book, "The Black Angel", Parker is haunted by the ghosts of his murdered wife and daughter (whether real or imagined), while his search for a missing New York prostitute is linked to the myth of the s. The setting of in each of his novels, coupled with the combination of suspense and the paranormal, have invited comparisons to the works of , although the two authors employ very different styles. Connolly was drawn to the tradition of American , because it seemed the best medium though which he could explore the issues of compassion, morality, reparation and salvation. He credits veteran authors , and as major influences, and is often praised for writing in a rich and introspective style of prose rarely exhibited by other authors within the genre.

He is an avid reader and music collector, and also cites cooking and going to the gym as pastimes.

The next installment in the Charlie Parker series, "The Reapers", is slated for publication in the U.S. and Canada on , , and in Ireland, U.K. and elsewhere on . It will differ from the earlier books in that the story will be told from the point of view of Parker's close friends and allies in combat, Louis and Angel. Louis and Angel are gay lovers whose quibbles and good humour are often the source of , and as such the novel will be lighter in tone. Connolly is currently working on the eighth Parker novel, tentatively titled "The Lovers", as well as a script for the film adaptation of his short story "The Erlking". He began contributing to a weekly in January 2006, which can be read on his official website, his page and 's AmazonConnect author feature.

*"Nocturnes", 2004 - a collection of supernatural tales book-ended by two novellas, 9 of which are transcripts of stories written for presentation on .

*"The Inkpot Monkey", 2004 in "Like A Charm: A Novel In Voices" - an anthology of short stories from 15 mystery writers, (also featured in "Nocturnes"). Edited by .
*"Mr. Gray's Folly", 2005 in "Dangerous Women" - an anthology of short stories from 17 crime writers. Edited by Otto Penzler.
*"The Cycle", 2005 under the pseudonym Laura Froom (after the titular vampire in a story from "Nocturnes") in "Moments: Short Stories by Irish Women Writers in Aid of the Victims of the Tsunami". Edited by Ciara Considine.
*"A Haunting", June 2008 in "Downturn Tales: Stay-Up-All-Night Stories from Your Favorite Bestselling Authors".

*"The New Daughter" - partially based on a short story of the same name from "Nocturnes". Luiso Berdejo is set to direct John Travis' screenplay and the film will star and . Shooting is set to begin in early 2008.
*"The Book of Lost Things" - under development by Irish director John Moore.
*"Sanctuary" - based on the novel "Bad Men" and under development.
*"Some Children Wander By Mistake" - a short film adaptation based on another short story from the "Nocturnes" collection.