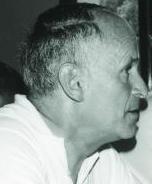 Laurent-Moïse Schwartz ( in &ndash; in ) was a French .

Among other positions, he taught at from 1959 to 1980. His considerable mathematical work, including the of distributions, won him the in 1950. Apart from his work, he was a well-known outspoken . Leaning towards , he refused 's . He campaigned against the . In danger of being classified as a under the Nazi racial laws, he had to spend parts of WWII in hiding under aliases, predominantly "Laurent Sélimartin". He was related to the .