Fear of a Black Planet

Fear of a Black Planet 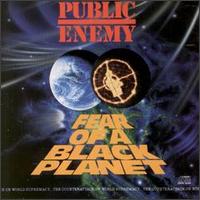 
"Fear of a Black Planet" is the -nominated third by American hip hop group Public Enemy, released on , 1990 on . This album debuted at #10 on the (in the week of , 1990), and was the group's first highest-charting selling rap album, the album was #1 on the / Albums chart as well.

The album's musical qualities were overshadowed by a controversy surrounding alleged anti-Semitic remarks by group member . After the controversy had been forgotten, however, the album's critical reception was generally very positive, with many commentators ranking it equal to or better than the previous album, "" (1988).WW In particular, critics were favorable to 's innovative and diverse production and 's . The "Encyclopedia of Popular Music" credits "Fear of a Black Planet"'s atmosphere to the "bunker mentality" of "clashes with the press", and specifically cites "", which "bites harder than just about any other track in rap's history" (p. 1864).

"Professional reviews":
*"" (5/17/90) – 4 Stars – Excellent – "Public Enemy has never aimed for anything less than a comprehensive view of contemporary black America...Fear of a Black Planet complements this ambition with stunning maturity and sophistication."

*"Q" magazine (2/91) – 4 Stars – Excellent – Recommended by Q as one of the five best rap albums of 1990 and ranked as one of the Fifty Best Albums of 1990. – "...scalding attack on white supremacy." Q (9/95, p.132) – 5 Stars – "...achieved the near impossible by being every bit as good as its predecessor. The music was Public Enemy's now-familiar scream but was augmented with a percussive tinge that reflected the ever greater Afrocentricity."

*"" (7/15/95, p.47) – 10 (out of 10) – "...where do you go once you've made the greatest hip-hop album ever? Unbelievably, you consolidate that with an equally splendid follow-up....This time the sounds were softened slightly with flashes of `real' instrumentation but the content remained as astonishingly tough and intelligent as before."

All tracks were written by , and , except where noted.

The following lists some of the songs and sounds sampled on "Fear of a Black Planet".

;"Fear of a Black Planet":*"Long Red (Live)" by Mountain:*"Holy Ghost" by :*"Summertime" by Billy Stewart:*"Flyte Time" by :*"Different Strokes" by Syl Johnson:*"Underdog" by Sly & the Family Stone:*"Spirit of the Boogie" by Kool and the Gang

*For a time in , commercials for were shown with the cast rapping the refrain of "911 is a Joke".

*The main theme song in the movie "" was "Fight The Power".