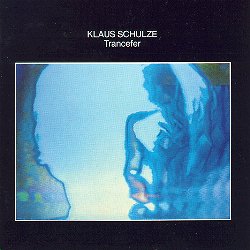 "Trancefer" is the fourteenth album by .

With a total running time of 37 minutes and 23 seconds, it is the shortest album in Schulze's canon. It features strong performances by Wolfgang Tiepold on cello and on percussion. Although it was his second album recorded with digital instruments, and has a great deal of treble, it is an example of the Berlin School genre which developed in the 's. The second track, "Silent Running", was inspired by the science fiction film of the same name starring . Other works of science fiction awarded Schulze pieces were Dune and .

"Trancefer" is quite distinctive in its sound and arrangements. It is quite different from what Schulze was doing in the 70's in the sense that it is not a composition that uses sequencers, transpositions, and a main melody line. "Trancefer" is more syncopated, and here the main focus is put on the dialog between the percussions and the chords Schulze is playing on the Yamaha CS-80 synthesizer.

There is a pre-release of "Trancefer", called "Trancefer half-speed cut", which consists of 300 copies at 45RPM normal cut, and 500 copies at 33RPM, the 'halfspeed' cut. The mix is different from the original album, and the main sequence is reminiscent of the one which features in "Bellistique" on the "...Live..." album, although this is more evident in the 'half-speed' cut, than the full release version.

It is interesting to note that the track "Opheylissem" on the "" is reminiscent of "A Few Minutes After Trancefer".