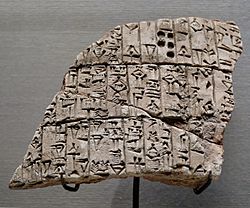 Fragment of an inscription of Urukagina; it reads as follows: "He [Uruinimgina] dug (…) the canal to the town-of-NINA. At its beginning, he built the Eninnu; at its ending, he built the Esiraran." (Musée du Louvre)

Urukagina (reigned ca. 2380 BC–2360 BC, short chronology), alternately rendered as Uruinimgina or Irikagina, was a ruler (énsi) of the city-state Lagash in Mesopotamia. He assumed the title of king, claiming to have been divinely appointed, upon the downfall of his corrupt predecessor, Lugalanda.

He is best known for his reforms to combat corruption, which are sometimes cited as the first example of a legal code in recorded history. Although the actual text has not been discovered, much of its content may be surmised from other references to it that have been found. In it, he exempted widows and orphans from taxes; compelled the city to pay funeral expenses (including the ritual food and drink libations for the journey of the dead into the lower world); and decreed that the rich must use silver when purchasing from the poor, and if the poor does not wish to sell, the powerful man (the rich man or the priest) cannot force him to do so.[1]

Urukagina's code is perhaps the first recorded example of government reform, seeking to achieve a higher level of freedom and equality. It limited the power of the priesthood and large property owners and took measures against usury, burdensome controls, hunger, theft, murder, and seizure (of people's property and persons); as he states, "The widow and the orphan were no longer at the mercy of the powerful man". He is also said to have abolished the former custom of polyandry in his country, on pain of the woman taking multiple husbands being stoned with rocks upon which her crime is written.[2]

He also participated in several conflicts, notably a losing border conflict with Uruk. During his reign, Uruk fell under the leadership of Lugal-Zage-Si, énsi of Umma, who ultimately annexed most of the territory of Lagash and established the first reliably documented kingdom to encompass all of Sumer. The destruction of Lagash was described in a lament (possibly the earliest recorded example of what would become a prolific Sumerian literary genre), which stressed that "the men of Umma ... committed a sin against Ningirsu. ... Offence there was none in Urukagina, king of Girsu, but as for Lugal-Zage-Si, governor of Umma, may his goddess Nisaba make him carry his sin upon his neck" (alternatively - "may she carry his sin upon her neck"). Lugal-Zage-Si himself was soon defeated and his kingdom was annexed by Sargon of Akkad.

Some insight into Sumerian values can be gained from praise poems written for kings. While the kings may not always live up to this praise they show the type of achievements that they wished to be remembered by. Extracts below praise Urukagina who appears as a social reformer, getting rid of gross abuses of power that had taken hold in Lagash.

2. When Ningirsu, warrior of Enlil, granted the kingship of Lagash to Urukagina, selecting him from among the myriad people, he replaced the customs of former times, carrying out the command that Ningirsu, his master, had given him.

7. He cleared and cancelled obligations for those indentured families, citizens of Lagash living as debtors because of grain taxes, barley payments, theft or murder.

8. Urukagina solemnly promised Ningirsu that he would never subjugate the waif and the widow to the powerful.[3]

Excerpt of some regulations from the Reform document