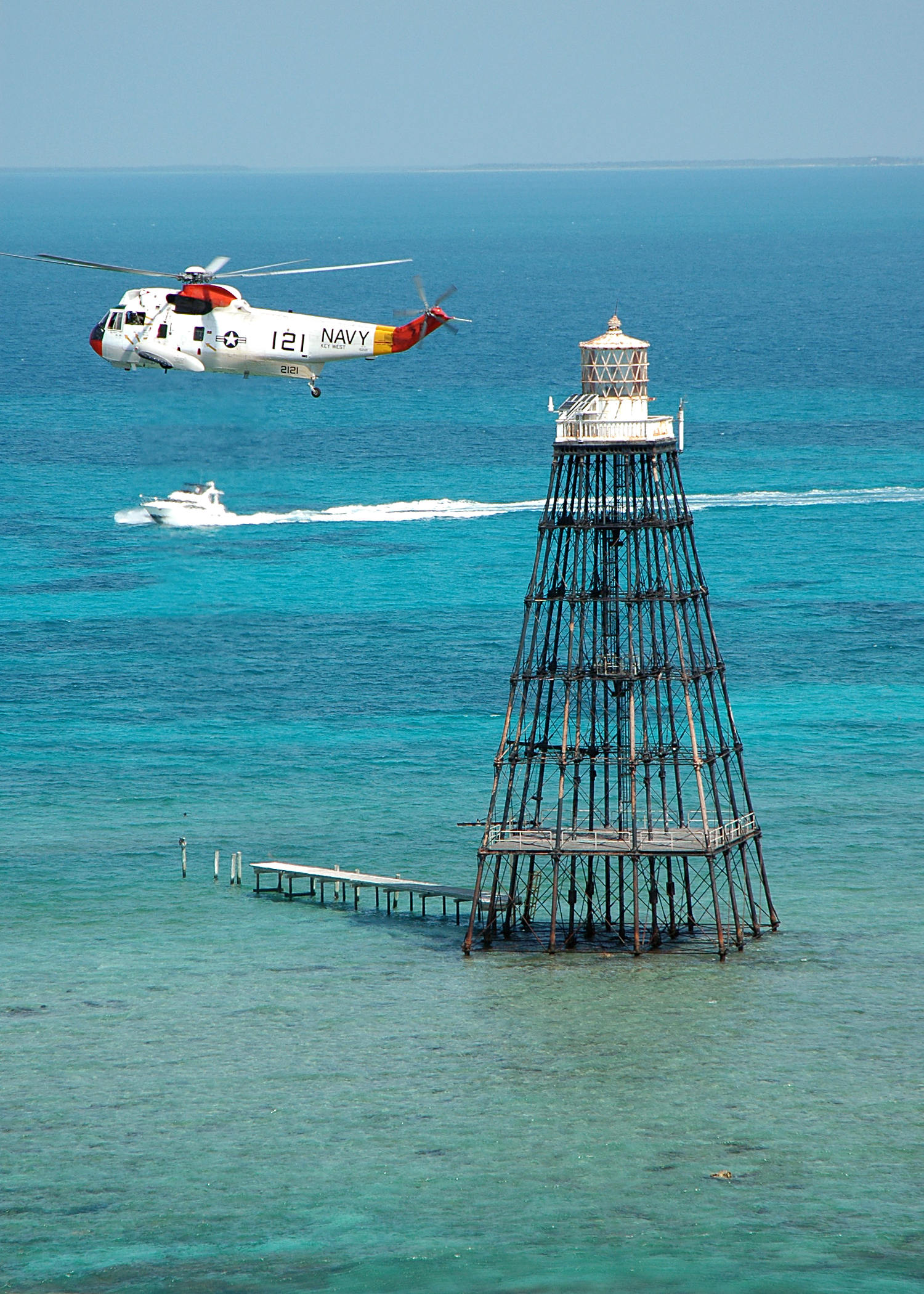 caption = Sand Key Light, 2005
location = southwest of
coordinates = coord|24|27|14|N|81|52|39|W|region:US_type:landmark
yearlit = 1853
automated = 1938
yeardeactivated = 1989-1998
foundation = cast iron screw piling
construction = cast iron
shape = square pyramidal skeletal tower
height = 120 feet
lens = first order
range = White 14 nmi, Red 11 nmiThe Sand Key Light is located eight miles southwest of , adjacent to the Southwest Channel, one of the main channels into Key West. It is located on a reef that is intermittently covered by sand. At times the key has been substantial enough to have trees, and in 1900 nine to twelve thousand s nested on the island. At other times the island has been washed away completely. As of 1998, Sand Key was a sand bar with no vegetation.

The first navigational light on Sand Key was a 60-foot brick tower built in 1827. The first keeper, John Flaherty, died in 1830, and his widow Rebecca became the keeper for the next 16 years. In 1844 a eroded part of the island, destroyed the keeper's house, and damaged the , which took a year to repair. The washed away the sand on the key, undermining and toppling the light tower. Rebecca Flaherty and five others in the lighthouse were killed.

As the had also been destroyed in the same storm, a ship, the "Honey", was acquired and outfitted as a to serve as the Sand Key Light until new lighthouses could be built. Due to efforts to reorganize the , Congress was slow to appropriate funds for the new lighthouses.

A screw-pile foundation for a new light on Sand Key was begun in 1852. Funds ran out before the foundation was complete, and the contractor had to wait seven years for final payment. Later that year Lieutenant , who had completed construction of the , was placed in charge of construction of the Sand Key Light. The light tower was completed in 1853. This light was the first to use the hydraulic lamp designed by George Meade.

The screw-pile foundation and open framework tower allowed the lighthouse to survive later hurricanes, including one in 1856 that completely washed away all of the island above water. The light was automated in 1938. In 1967 the first order was removed and replaced by a fourth order lens. That in turn was removed in 1982 and replaced with a flash tube array. The tower was severely damaged in a fire in 1989, and the light was moved to a nearby temporary structure. An attempt was made to restore the structure of the tower in 1995, but the keeper's quarters were demolished in 1996. The light was returned to the tower in 1998.