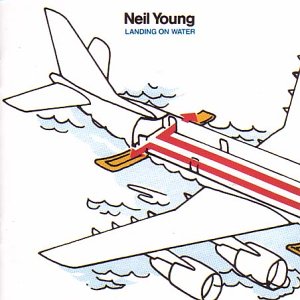 "Landing on Water" was 's 1986 return to rock music, after experimenting with , and country over his last few albums. Once again, however, Young did not play with Crazy Horse, with whom he had not worked for several years, and even went as far as to claim he would never play with them again, intensely frustrating the band at the time, who found this out from an interview they read.Critical reaction to this album is generally poor, citing mainly the obvious 1980s stadium drums, messy production and generally poor quality songs. Some fanswho, however, praise the album, believing that this album may have been an attempt to simply annoy , owner of who was suing him at the time for producing 'unrepresentative, uncommercial music'. The album contains the acidic shot at his erstwhile bandmate and cohorts, "Hippie Dream", which features the lyric "And the wooden ships/Are a hippie dream/Capsized in excess/If you know what I mean."

All tracks written by .