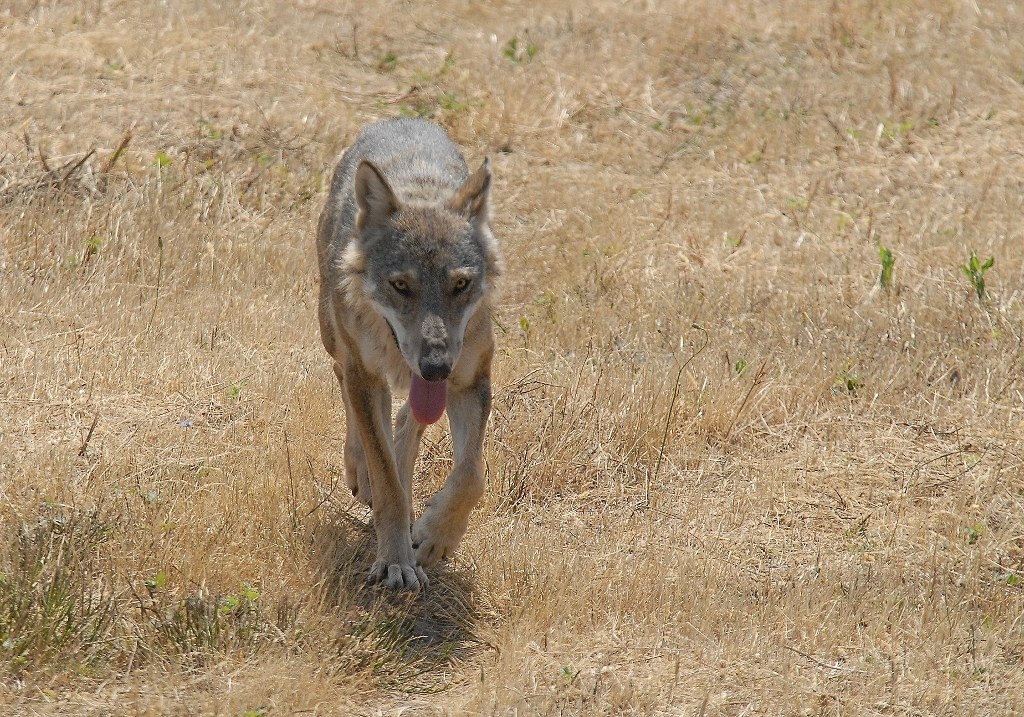 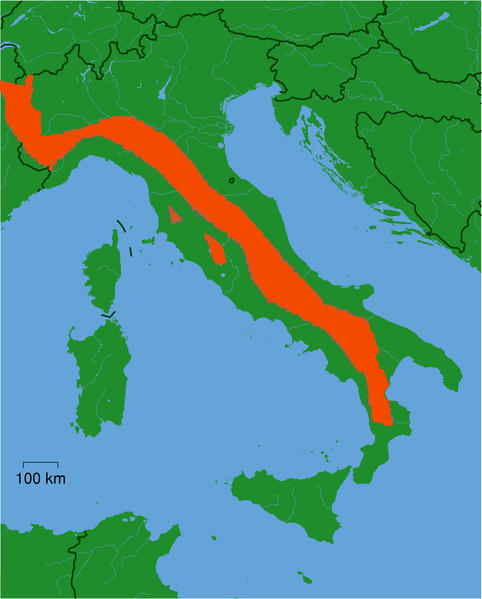 The Italian Wolf ("Canis lupus italicus") also known as the Apennine Wolf, is a subspecies of the found in the in . It was first described in 1921 and recognised as a distinct subspecies in 1999. [ [http://ec.europa.eu/environment/nature/conservation/species/ema/species/canis_lupus.htm European Mammal Assessment - Canis lupus ] ] Recently due to an increase in population, the subspecies has also been spotted in areas of . During recent years, Italian wolves have also established themselves in Southern , particularly in the Parc National du Mercantour. It is federally protected in all three countries.

Comparative studies on Italian wolves, Eastern European wolves and s, showed that Italy's wolf population was the purest, and least affected by hybridization with domestic dogs in Europe. [ [http://news.bbc.co.uk/1/hi/sci/tech/725601.stm BBC News | SCI/TECH | Wolves find haven in Italy ] ] However, in 2004 three wolves were found in the south-central Tuscan province of , sporting s on their hind legs, indicating some dog contamination in the gene pool. Though this has caused concern on the danger posed to the wolf's genetic purity, some biologists are encouraged by such an obvious symptom, as it is a potentially useful factor in diagnosing hybrids.

The Italian Wolf is a nocturnal hunter which feeds primarily on medium sized animals such as , , and . In the absence of such prey items, its diet will also include small animals such as hares and rabbits. An Italian wolf can eat up to 1,5-3 kg of meat a day. It will occasionally consume berries and herbs for .

The wolf has adapted well in some urbanised areas and as such, will usually not ignore refuse or domestic animals.

Due to a scarcity of large prey, wolf packs in Italy tend to be smaller than average. Packs are usually limited to a composed of a reproducing alpha pair, young subadults which remain with their birth family until they're old enough to disperse and produce cubs. However, in areas where large herbivores such as deer have been reintroduced, such as the Abruzzo National Park, packs consisting of 6-7 individuals can be found.

Mating occurs in mid-March with a two month gestation period. The number of cubs born is dependent on the mother's age, usually ranging from two to eight cubs. Cubs weigh 250-350 grams at birth and open their eyes at the age of 11-12 days. They are weaned at the age of 35-45 days and are fully able to digest meat at 3-4 months.

Until the end of the 19th century, wolf populations were widespread across Italy's mountainous regions. By the dawn of the 20th century, the persecutions began and in a short amount of time, the wolf was wiped out in the alps, Sicily and drastically reduced in the Appennine regions.

After the second world war, the situation worsened and the wolf populations reached a historic minimum in the 1970s. In 1972 Luigi Boitani and Erik Zimen were tasked with leading the first Italian investigation into the wolf's plight. Using an area between the Sibillini and Sila mountains as reference points, the duo concluded that the wolf population was composed of a maximum of 100-110 animals.

Starting from the 1970s, political debates began favouring the increase in wolf populations. A new investigation began in the early 1980s, in which it was estimated that there were now approximately 220-240 animals and growing. New estimates in the 1990s revealed that the wolf populations had doubled, with some specimens taking residence in the Alps, a region not inhabited by wolves for nearly a century. Current estimates indicate that there are 500-600 Italian wolves living in the wild. Their populations are said to be growing at a rate of 7% annually.

Wolves migrated from Italy to France as recently as 1992. The French wolf population is still no more than 40-50 strong, but the animals have been blamed for the deaths of nearly 2,200 sheep in 2003, up from fewer than 200 in 1994. Controversy also arose when in 2001, a shepherd living on the edge of the Mercantour National Park survived a mauling by three wolves. [ [http://news.bbc.co.uk/1/hi/world/monitoring/media_reports/1494957.stm BBC News | MEDIA REPORTS | French shepherd 'mauled by wolves' ] ] Under the Berne Convention wolves are listed as an endangered species and killing them is illegal. Official culls are permitted to protect farm animals so long as there is no threat to the species. [ [http://www.wolfsongalaska.org/gray_wolf_europe_cull.htm Wolf Song of Alaska: France's Bardot Demands EU Action on Wolf Cull ] ]

Although there is no overall historical review on Italian wolf attacks, a group of historians managed to summarize church and administrative accounts covering a period encompassing the 15th and 19th centuries ocurring in central , which once encompassed part of modern day Switzerland. The accounts indicated that in the 15th century, there were 40 attacks, in the 16th 30, in the 17th 167, in the 18th century 103 and in the 19th century 112. A single wolf was thought to have been responsible for 20 attacks in the Pragelato municipality between 1710-1711. Between 1801 and June 1825, 112 people (all but 3 of which were children) were attacked by wolves, 77 of which died. Only five of the deaths were considered due to rabid wolves, the rest being attributed to predatory attacks. The historians concluded from the descriptions given of the attacks that the authors were able to distinguish wolves from feral dogs, as well as rabid and non rabid wolves. As each of the cases were corroborated by multiple documents, they have been considered genuine.No fatal attacks have been recorded after World War II, and rabies has been eradicated from Italy since the 1960's, thus decreasing the chances of future human fatalities.

The wolf figures most prominently in Italian culture through the myth of , the traditional founders of . The twin babies were ordered to be killed by their great uncle who feared they would usurp his claim to the throne of . The servant ordered to kill them however, relented and placed the two in a cradle and laid the cradle on the banks of the and went away. The river, which was in flood, rose and gently carried the cradle and the twins downstream, where under the protection of the river deity , they would be adopted by a she-wolf known as "Lupa" in . The designation was also used for female prostitutes and for priestesses of a wolf goddess, leading to an alternative theory that the "wolf" was human. They were nurtured underneath a fig-tree and were fed by a woodpecker. Both animals were sacred to Mars.

According to the "", the city of was besieged by the which devoured both livestock and men. , who was living in Gubbio at the time took pity on the townsfolk, and went up into the hills to find the wolf. Soon fear of the animal had caused all his companions to flee, but the saint pressed on and when he found the wolf he made the sign of the cross and commanded the wolf to come to him and hurt no one. Miraculously the wolf closed his jaws and lay down at the feet of St. Francis. "“Brother Wolf, you do much harm in these parts and you have done great evil…”" said Francis. "“All these people accuse you and curse you… But brother wolf, I would like to make peace between you and the people.”" Then Francis led the wolf into the town, and surrounded by startled citizens he made a pact between them and the wolf. Because the wolf had "“done evil out of hunger”" the townsfolk were to feed the wolf regularly, and in return, the wolf would no longer prey upon them or their flocks. In this manner Gubbio was freed from the menace of the predator. Francis, ever the lover of animals, even made a pact on behalf of the town dogs, that they would not bother the wolf again.

* [http://ours-loup-lynx.info/rubrique.php3?id_rubrique=30 News on the wolf, lynx and brown bear in France]
* [http://www.kora.unibe.ch/pdf/docus/docwf_d.pdf Report on the return of the wolf in Switzerland]
* [http://digilander.libero.it/idste/lupo.html Italian wolf]
* [http://www.comitatoparchi.it/GRUPPOLUPOITALIA.htm Gruppo Lupo Italia]