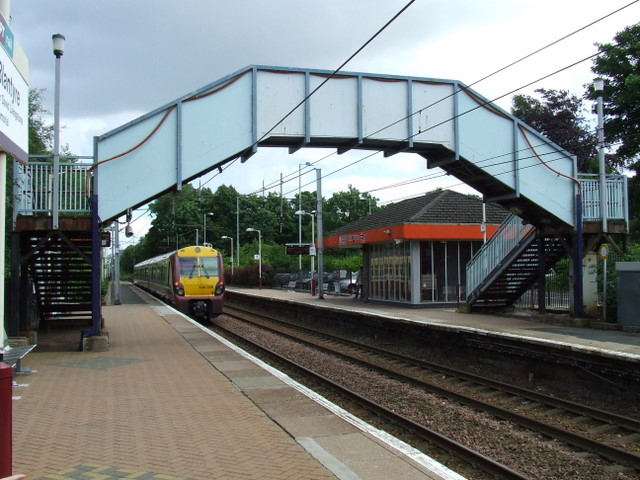 Blantyre railway station serves the burgh of Blantyre, near Hamilton in , . It is located on the 14 km (8¾ miles) south east of (Low Level). Passenger services are provided by on behalf of .

Originally a Victorian style station featuring two wooden station buildings, one on each of the two platforms, these were demolished in the late 1970s. It was replaced by a modern building on the western side of the line.

Originally served by steam trains and later s, the line originally connected Blantyre to Glasgow Central High Level. Following the electricification in 1974, the line was worked by s with services via Cambuslang and occasional services via Kirkhill. Upon development of the it was connected through to the north western fringes of .

Monday to Saturdays, 4 trains per hour go to Glasgow Central Low Level, before continuing to (Dalmuir/Milngavie) northbound. Southbound a half-hourly service operates to Motherwell via Airbles; one of these per hour continues to Lanark via Holytown. Additionally a half-hourly Larkhall express service calls at Blantyre before continuing up to Hamilton Central then onto the Larkhall line and terminating. Blantyre has a half-hourly service on Sundays between Motherwell and Balloch via Airbles and Yoker/Singer.