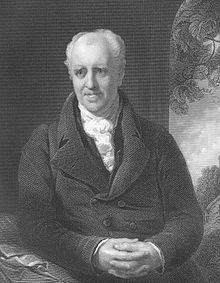 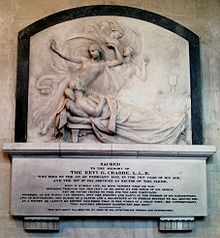 He was born in Aldeburgh, Suffolk, the son of a tax collector, and developed his love of poetry as a child. In 1768, he was apprenticed to a local doctor, who taught him little, and in 1771 he changed masters and moved to Woodbridge. There he met his future wife, Sarah Elmy, who accepted his proposal and had the faith and patience not only to wait for Crabbe but to encourage his verse writing. His first major work, a poem entitled "Inebriety", was self-published in 1775. By this time he had completed his medical training, and had decided to take up writing seriously. In 1780, he went to London, where he had little success, but eventually made an impression on Edmund Burke, who helped him have his poem, The Library, published in 1781. In the meantime, Crabbe's religious nature had made itself felt, and he was ordained a clergyman and became chaplain to the Duke of Rutland at Belvoir Castle in Leicestershire.

The two works for which Crabbe became best known were The Village (1783) and The Borough (1810), both lengthy poems dealing with the way of life he had experienced. In 1783, he also married Sarah. In 1814, he became Rector of Trowbridge in Wiltshire, where he remained. By the time of his death, he was well regarded and a friend of William Wordsworth, Sir Walter Scott and other major literary figures of the time.

Benjamin Britten's opera Peter Grimes is based on The Borough. Byron, an avowed admirer of Crabbe's poetry, called him "Nature's sternest painter, yet the best". Crabbe's poetry was predominantly in the form of heroic couplets.[2] His poetry has also been described as unsentimental in its depiction of provincial life and society.[3]

He was also an active and notable coleopterist and recorder of beetles, and is credited for taking the first specimen of Calosoma sycophanta L. to be recorded from Suffolk. He published an essay on the Natural History of the Vale of Belvoir in John Nichols's, Bibliotheca Topographia Britannica, VIII, Antiquities in Leicestershire, 1790. It includes a very extensive list of local coleopterans, and references more than 70 species. This text was later reviewed by the renowned entomologist Horace Donisthorpe (Leics. lit. phil. Soc., 4, 1896, 198–200), who concluded that George Crabbe had both a broad knowledge of national species and was well acquainted with contemporary scientific literature, including works by Linnaeus and Fabricius.