Conchoraptor (meaning "conch plunderer") is a genus of oviraptorid dinosaur from the late Cretaceous Period of what is now Asia. 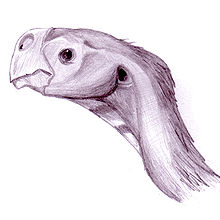 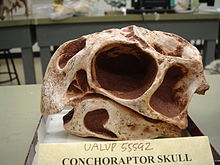 Skull of Conchoraptor from the University of Alberta

Conchoraptor was a small dinosaur, only 1–2 meters (4–6 feet) in length.[1] Unlike many other oviraptorids, Conchoraptor lacked a head crest.[1] Like its relatives, it lacked teeth. Instead of teeth, oviraptorids had powerful beaks, possibly adapted to crushing mollusk shells.[1] The skull of Conchoraptor was heavily pneumatised, with most of the bones hollow.[2] Internal connections between both ears functioned as resonance chambers and improved hearing.[3]

When first discovered in the Red Beds of Hermiin Tsav of the Late Campanian Nemegt Formation by a Polish-Mongolian expedition in 1971,[1] scientists believed that Conchoraptor was a juvenile Oviraptor and that the animal's missing crest would have begun to grow when the animal reaching sexual maturity.[1] Further study of multiple skeletons showed that Conchoraptor belonged in a new genus.[1] The hands of Conchoraptor were a major reason that scientists decided to split it off from Oviraptor.[1] Anatomically the hands seemed to be an evolutionary intermediate between those of "Ingenia" and Oviraptor, making it obvious that this animal was not a member of a known species.[1]

The type species of this new genus, Conchoraptor gracilis, was described and named by Barsbold, in 1986. The generic name is derived from Greek konkhè, "mussel", and Latin raptor, "plunderer".[4] This name reflects Barsbold's hypothesis that oviraptorids, rather than preying primarily upon eggs as had been traditionally thought, may have been specialized to feed on mollusks.[1] The specific name means "gracile" in Latin. The holotype is IGM 100/20, a partial skeleton with skull. Later about two dozen specimens were formally referred to the species.

Conchoraptor was by Barsbold assigned to the Oviraptoridae in 1986. Recent analyses show it was a member of the oviraptorid subfamily Ingeniinae.