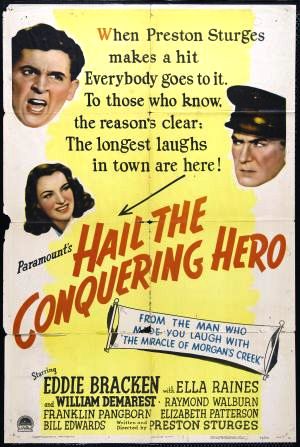 "Hail the Conquering Hero" (1944) is a satirical comedy/drama written and directed by , starring , and , and featuring , , and Bill Edwards.

Sturges was nominated for a fy|1945 Academy Award for his screenplay. Many critics consider the film to be one of Sturges' best.

Woodrow Lafayette Pershing Truesmith () is a small town boy whose father was a Marine who died a hero in . Woodrow has been rejected by the Marine Corps owing to his chronic . Rather than disappoint his mother (), he pretends to be fighting overseas in while secretly working in a shipyard.

After a chance encounter in a bar in which he buys a round of drinks for six Marines headed by Sergeant Heppelfinger (), the group decides to return Woodrow to his home, so his mother will not have to keep worrying about him. The Marines, to the chagrin of Woodrow, encourage the charade by loaning him their medals.

Unfortunately, word leaks out, and when they step off the train, the seemingly-harmless deception has escalated beyond control; the entire town turns out to greet its homegrown hero. With an election coming up, the citizens decide to make an unwilling Woodrow their candidate against the pompous current mayor, Mr. Noble (). Complicating matters even further, Woodrow had written his girlfriend Libby (), telling her not to wait for him. She had since gotten engaged to Forrest Noble (Bill Edwards), the mayor's son.

Finally, Woodrow can stand it no longer. He confesses everything at a campaign rally and goes home to pack. Ella breaks her engagement and tells Woodrow she is going with him. Meanwhile, Heppelfinger praises Woodrow's courage in telling the truth to the stunned townsfolk, and after considering the matter, they decide that Woodrow has just the qualities they need in a mayor.

Cast notes:
*This was the second and last time that Preston Sturges and Eddie Bracken worked together on a feature film. Their first was "", which immediately preceded it.
*Many members of Sturges' unofficial "stock company" of character actors appear in "Hail the Conquering Hero", among them George Anderson, Al Bridge, Georgia Caine, Chester Conklin, Jimmy Conlin, William Demarest, Harry Hayden, Esther Howard, Arthur Hoyt, , Torben Meyer, , , Jack Norton, Franklin Pangborn, , and Robert Warwick. This was also the second of three films that Raymond Walburn did with Sturges: he did "" and would go on to do "".
*This was the ninth of ten films written by Preston Sturges that William Demarest appeared in (see note). [Demarest appeared in "" (fy|1935), "Easy Living" (fy|1937), "" (fy|1940), "Christmas in July" (fy|1940), "" (fy|1941), "" (fy|1941), "" (fy|1942), "" (1944), "" (fy|1944) and "The Great Moment" (1944)]
*"Hail the Conquering Hero" was the first film made by ex-boxer , "The Tacoma Assassin", but its release was held up for so long, seven other films that Steele appeared in had already reached the public by that time. [imdb name|0824543|Freddie Steele]

Aside from songs associated with the military, such as "" by Harry Carlton and Joe Tunbridge and "", music by , "Hail the Conquering Hero" contains two original songs by :

Other songs in the film include two written by and : "Have I Stayed Away Too Long" and "Gotta Go to Jailhouse".

"Hail the Conquering Hero" had a number of working titles on its way to the screen. An early title was "Praise the Lord and Pass the Ammunition", and "Once Upon a Hero" and "The Little Marine" were also used.

Although "The Great Moment", which had been filmed before "Hail the Conquering Hero", was released after it, this film was the last that Sturges made for , as his contract ran out and he left the studio even before the film was completely edited. He and the studio had numerous conflicts over editorial control, censorship problems and other issues on "The Great Moment" and "". The studio also balked at Sturges' repeated use of the same bit actors again and again in most of his Paramount films, what has been called his "stock company" or "repertory troupe." The studio was concerned that people would get tired of seeing the same faces, and wanted Sturges to use different actors, which he refused to do: "I always replied that these little players who had contributed so much to my first hits had a moral right to work in my subsequent pictures."

There was also conflicts with the studio about this film: Paramount wanted actress Ella Raines, who was playing "Libby", to be replaced: not only did they feel she didn't look like a small-town girl, but she didn't have enough box-office draw, and with the other lead roles being taken by Bracken and Demarest, the studio was concerned that the film wouldn't have enough star power to be effectively sold. But filming had already started, and Sturges refused to replace her.

I said that had [producer] Buddy [DeSylva] been there and objected to her casting at its inception, I would of course have agreed. But to have her thrown off the picture after she had been announced for the part and had started shooting, with all the publicity that engendered, would ruin her career. It seems very unimportant now whether she was kept in or thrown out. It seemed very important then. I had read Cervantes. I should have known about tilting at windmills.

It was customary at the time for the War Department to review scripts which dealt with military matters, but the revisions they requested were minor. Filming began on "Hail the Conquering Hero" on fy|1943, and continued through of that year. Sturges had designed the film to be relatively small scale, and he re-used sets left over from "The Miracle of Morgan's Creek".

After an unsuccesful preview in , the film was recut by producer , as Sturges had already left Paramount. After another unsuccessful preview &ndash; and, not coincidentally, after "The Miracle of Morgan's Creek" had been released and become a smash hit &ndash; DeSylva accepted Sturges' offer to return, unpaid, and rewrite the script. Retakes, directed by Sturges, were done on the 7th through 11th of April fy|1944, and Sturges restored his overall conception of the film. [TCM [http://www.tcm.com/tcmdb/title.jsp?stid=77205&category=Overview Overview] ]

The film was released on 1944. [IMDB [http://www.imdb.com/title/tt0036891/releaseinfo Release dates] ] Sharp-eyed viewers may have noted that in the scene where the Marines leave the Oakdale station, a billboard behind them advertises "The Miracle of Morgan's Creek", the film that Sturges made, also starring Eddie Bracken, immediately before this one. [imdb title|0036891]

Reviews were uniformly excellent, with writng in the "" that it was "one of the wisest [movies] ever to burst from a big-time studio." Sturges exulted that, "It proves that a good story can lick its weight in stars and pomposity any day."

Sturges was nominated for a fy|1945 Academy Award for his screenplay for "Hail the Conquering Hero", and was nominated in the same category that same year for his screenplay for "The Miracle of Morgan's Creek." In addition, the picture was nominated by the as "Best Picture of 1944", and Eddie Bracken and Franklin Pangborn won "Best Acting" awards from the Board. The "" named the film one of the "Ten Best Films of 1944" [Allmovie [http://www.allmovie.com/cg/avg.dll?p=avg&sql=1:21270~T4 Awards] ]

One writer described "Hail the Conquering Hero" as "a satire on mindless hero-worship, small-town politicians, and something we might call "Mom-ism," the almost idolatrous reverence that Americans have for the institution of Motherhood," and Sturges himself said that of all his films, it was "the one with the least wrong with it." The film has the normal hallmarks of Sturges' best work: an extremely fast pace, overlapping dialogue, and rapid-fire punch lines. 's called it "like a wonderful piece of clockwork."

The film can be seen as a look at both patriotism and hero worship in America durig , and while adhering to the requirements of the &ndash; even more restrictive in wartime than before &ndash; in retrospect it can be seen as somewhat critical of people's willingness at that time to uncritically embrace heroes. In this regard it is a companion piece to "", the previous Sturges satirical venture.

Dialogue from the film