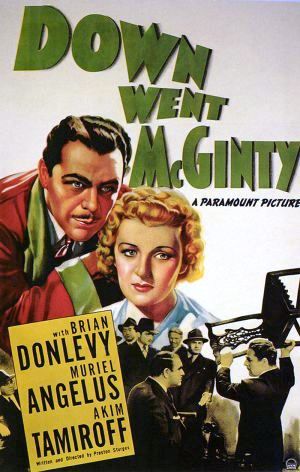 "The Great McGinty" is a fy|1940 film written and directed by , starring and and featuring and . It was Sturges's first film as a director; he sold the story to for just $10 on condition he direct the film. Sturges went on to win the .

In the U.K. the film was retitled "Down Went McGinty".

Dan McGinty () is a tramp who, cajoled into voting under a false name in order to get $2, impresses a local political boss () by voting thirty-seven times in a rigged mayoral election. McGinty becomes one of the boss's enforcers, then his political protégé, wins the mayor's job as a "reform" candidate, then goes on to the governor's mansion before a change of heart compels him to take public service seriously.

"The Great McGinty" had numerous working titles: "The Story of a Man", "The Vagrant", "The Mantle of Dignity", "The Biography of a Bum", and "Down Went McGinty", which was used for the film's release in the U.K. Sturges had written the original story, "The Story of a Man", in 1933 with in mind. According to film historian , Sturges was inspired by the career of , who was impeached and removed from office as governor of New York.

After trying to sell the story to Universal in 1935, and the "" in 1938 under the title "Biography of a Bum", Sturges finally sold it to Paramount on fy|1939 for $10 on the condition that he be allowed to direct it.

Production on the film was delayed to allow Akim Tamiroff to do "The Way of All Flesh", but it began on fy|1939. Sturges contracted during filming, and required a nurse to attend to him on the set. Production stopped on fy|1940 with one day's shooting left to do, which was accomplished on , after the first cut of the film had already been made.

Brian Donlevy appeared in a "Philip Morris Playhouse" radio adaptation in 1942 on the CBS radio network. Donlevy also appeared in a television adaptation on "Lux Video Theeatre", broadcast on 1955, with and . The director was and Preston Sturges' screenplay was adapted by S.H. Barnett. [imdb title|0637879|Lux Video Theatre: The Great McGinty]

Paramount considered a remake of the film starring Bing Crosby in fy|1950, and in fy|1954 with Bob Hope, but decided against both.

Tamiroff's malaprop-laced performance inspired the cartoon character , the male half of the villainous husband-and-wife team Boris and Natasha on "".

Dialogue from the film