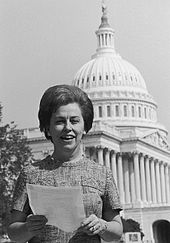 Martha Wright Griffiths (January 29, 1912 – April 22, 2003) was an American lawyer and judge before being elected to the United States House of Representatives in 1954. Griffiths was the first woman to serve on the powerful House Committee on Ways and Means and the first woman elected to the United States Congress from Michigan as a member of the Democratic Party. She was also the person most responsible for including the prohibition of sex discrimination under Title VII in the Civil Rights Act of 1964. In 1982, Griffiths was also the first female elected as Lieutenant Governor of Michigan. Matilda Dodge Wilson was appointed the first female Lieutenant Governor of Michigan in 1939.

Martha Edna Wright was born in Pierce City, Missouri. She attended public schools, and went on to graduate with a B.A. from the University of Missouri in 1934. She choose to continue her education by studying law and graduated from the University of Michigan Law School in 1940. She married Hicks George Griffiths (b. 1910), a lawyer and a judge as well as chairman of the Michigan Democratic Party from 1949–1950.

She worked as a lawyer in private practice then in the legal department of the American Automobile Insurance Co. in Detroit from 1941–1942 and then as the Ordnance District contract negotiator from 1942-1946. She was elected to the Michigan House of Representatives, serving from 1949 to 1953. In 1953, she was appointed as recorder and judge of the Recorder's Court in Detroit and sat as judge from 1953–1954--the first woman to do so.

In 1954, Griffiths was elected as a Democrat from Michigan's 17th congressional district to the 84th Congress and was subsequently re-elected to the nine following Congresses, serving from January 3, 1955 to December 31, 1974 in the U.S. House. She sat as a delegate at the Democratic National Convention in 1956 as well as in 1968. She was not a candidate for re-election to the 94th Congress in 1974. During her time in Congress, Griffiths sponsored the Equal Rights Amendment, one of only a few proposed amendments to pass in Congress and be sent to the states for ratification.

After her congressional service, Griffiths returned to the practice of law and then served as the 57th Lieutenant Governor of Michigan from 1983 to 1991 on the ticket of Governor James Blanchard. She was inducted into the Michigan Women's Hall of Fame in 1983 and to the National Women's Hall of Fame a decade later in 1993. She retired to her home in Armada, Michigan, where she lived until her death in 2003.