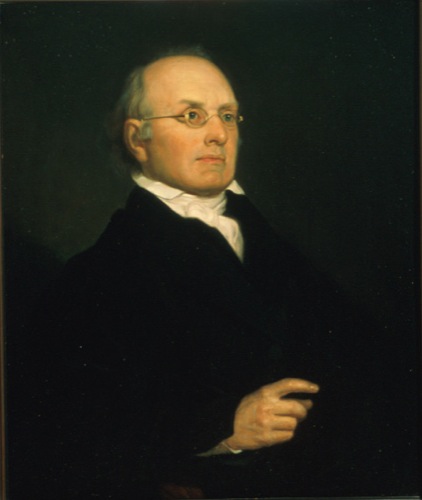 Story was born at . His father was Dr. Elisha Story (1743-1805), a member of the who took part in the in 1773. Doctor Story moved from Boston to Marblehead during the war. His first wife, Ruth (née Ruddock) soon died, leaving children, and Story remarried in November, 1778, to Mehitable Pedrick, nineteen, the daughter of a wealthy shipping merchant who would lose most of his fortune during the Revolutionary War. Joseph was the first-born of the many children of this second marriage.

The boy Joseph Story studied at the Marblehead Academy until the fall of 1794 when his father withdrew him from school because the schoolmaster, William Harris (later president of ), beat Story for some minor offense. On his second attempt, Story was accepted at in January, 1795, with the class of 1798. At Harvard, he was an excellent and well-behaved student. After graduating second in his class, he read law in Marblehead under Samuel Sewall, then a congressman and later chief justice of Massachusetts. He later read law under Samuel Putnam in Salem.

He was admitted to the bar at , in 1801. As the only lawyer in aligned with the Jeffersonian s, he was hired as counsel to the powerful Republican shipping firm of George Crowninshield & Sons. He was a poet as well, and published "The Power of Solitude" in 1804, one of the first long poems by an American. In 1805 he was elected to the , where he served until 1808, when he defeated a Crowninshield to become Salem's representative in Congress, serving from December 1808 to March 1809, during which he led the successful effort to put an end to Jefferson's Embargo against maritime commerce. He re-entered the private practice of law in Salem and was again elected to the state House of Representatives, which he served as Speaker in 1811.

Story's young wife, Mary F.L. Oliver, died in June 1805, shortly after their marriage and two months after the death of his beloved father. In August, 1808, he married Sarah Waldo Wetmore, the daughter of Judge William Wetmore of Boston. They would have seven children, though only two, Mary and , survived to adulthood. Their son became a noted poet and sculptor (his bust of his father is in the entrance to the Harvard Law School Library) who would publish "The Life and Letters of Joseph Story" (2 vols., Boston and London, 1851).

In November 1811, at the age of thirty-two, he became the youngest Associate Justice of the . Judge Story continues to be the youngest-appointed Supreme Court Justice. Here he found a congenial home for the brilliance of his scholarship and the development and expression of his political philosophy.

Soon after Story's appointment, the Supreme Court began to bring out into plain view the powers which the had given it over state courts and state legislation. Chief Justice led this effort, but Story had a very large share in the remarkable decisions and opinions issued from 1812 until 1832. For instance, Story wrote the opinion for a unanimous court in "" following Marshall's recusal. He built up the department of in the United States federal courts; he devoted much attention to equity and the department of . In 1819 he attracted much attention by his vigorous charges to grand juries denouncing the , and in 1820 he gave a public anti-slavery speech in Salem and was prominent in the proceedings of the Massachusetts Convention called to revise the state .

Non-lawyers are most likely to be familiar with Story's 1841 opinion in the case of "United States v. The Amistad", which was the basis for a 1997 movie of the same name by . Story was played by an actual retired Supreme Court justice, .

In 1829 he moved from Salem to Cambridge and became the first at , meeting with remarkable success as a teacher and winning the affection of his students, who had the benefit of learning from a sitting Supreme Court judge. He was a prolific writer, publishing many reviews and magazine articles, delivering orations on public occasions, and publishing books on legal subjects which won high praise on both sides of the Atlantic.

Story died at home in Cambridge, and is interred at the there. was named in his honor, as was Story Hall, a dormitory at Harvard Law School.