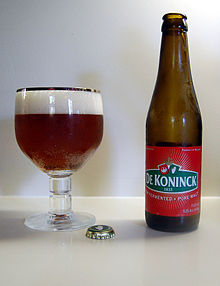 De Koninck Brewery (Brouwerij De Koninck) is a Belgian brewery based in Antwerp ([[Antwerpen] in Flemish). The glass in which De Koninck's flagship beer is served is called a bolleke, although this term is most colloquially used to refer to a glass filled with the beer itself and is the way the beer is order in bars.

In the past the brewery has brewed several beers, for which the production has now been discontinued:

At the edge of the city of Antwerp, along the road to Malines (now known as Mechelen in Flemish), there was an inn 'De Plaisante Hof' (The Merry Garden). Despite the pleasant name, the inn was situated right across from the notorious gallows field (now King Albert Park) where, in the Middle Ages, murderers and other criminals were hanged. On this boundary between Antwerp and Berchem, in front of De Plaisante Hof, stood a stone boundary post showing a put-up hand which was token for the merchants entering the town to pay toll. This 'toll hand' now shows on the green right-side escutcheon of the De Koninck Brewery. These days, you can still admire it in the brewery itself. The hand is also recognized as the symbol of the city of Antwerp, which is derived from the Flemish for 'hand'.

On June 26th, 1827, Joseph Henricus De Koninck, then husband to Elisabeth Cop, bought De Plaisante Hof. However, he died soon afterwards and his widow who then remarried Johannes Vervliet who bought back the goods from the inheritance in 1833. At that time Belgium was barely three years old (created in 1830). He turned the inn into a brewery which he named 'De Hand' (The Hand), after the toll sign mentioned earlier.

When Johannes Vervliet died in 1845, the brewery's name was successful and it's beer had become well known. Though relatively small, this artisanal brewery De Hand was the beginning of Brewery De Koninck.

The name De Koninck appeared for the first time with Vervliet's stepson, Carolus De Koninck, who carried on with the business. When he died in 1883, he was succeeded by his son François Joseph, and later by his daughter Josephina Joanna, as head of the family business. Sales were consistently good and the barley-based beer had become the most popular drink in the city of Antwerp.

In 1912 the family business at the corner of the Mechelsesteenweg and the Boomgaardstraat was changed into a Limited Liability Company, Brewery Charles De Koninck, with Josephina De Koninck as principal shareholder. Florent Van Bauwel was appointed executive. According to the brewery's records, Van Bouwel acquitted himself so well, especially during the First World War, that Miss De Koninck favored him to take over the company. In 1919 Van Bouwel entered into a partnership with the Van den Bogaerts of Willebroek. Later, Florent Van Bauwel and Joseph Van den Bogaert were succeeded by their sons Joseph Van Bauwel and Modeste Van den Bogaert. Dominique and Bernard Van den Bogaert, sons of Modeste continued leading the brewery during the last two decades and in 2010 the brewery was sold to the Duvel Moortgat Brewery but still acts as an autonomous brand within the group.[1]