Fluctuat nec mergitur (or FLVCTVAT·NEC·MERGITVR in Roman-style inscriptions) is a Latin phrase meaning "He who rises with the wave is not swallowed by it": 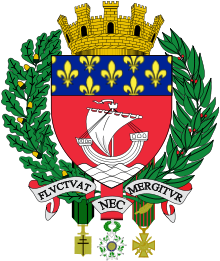 Coat of arms of Paris

This phrase is the motto of Paris, France, and is present in the city coat of arms depicting a ship floating on a rough sea. Both motto and city arms have their origins in the river Seine boatsman's corporation; this powerful hanse ruled the city's trade and commerce as early as the Roman era.[citation needed] Although this corporation through the centuries became an entity resembling more a municipal government than a trade organization, they maintained their original arms and motto, and it is for this that the Mairie de Paris bears them still today.

Prof. Francisco Antonio García Romero (in his prologue of the work of J. L. Sánchez Villanueva, Monumentos con arte. Jerez, Jerez de la Frontera, 2011) suggests that the motto was taken from the treatise Antichristus 59, 1, of Hippolytus (3rd-century a. D.), where it refers to the Church: cheimázetai all’ouk apóllytai.

The phrase is used in "Les Copains d'abord" by the French singer/poet Georges Brassens. It is also the motto of Albert Messiah's classic textbook on quantum mechanics. It is also used on the back of the CD insert of "The Big Roar", the debut album from Welsh band The Joy Formidable.