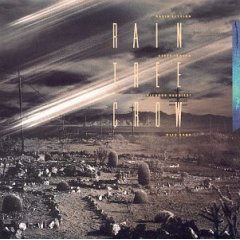 Rain Tree Crow was the name used by the successful English New Wave band Japan (excluding ) when they briefly reformed for this one-off project, which would be their final album. It was the first time all four members of the band, , , and , collaborated on a project since the compilation of the 1983 live album "".

The majority of the material on their eponymous album was written as a result of group improvisations (aside from 'Blackwater'). There were no pre-rehearsals and the music that emerged was a hybrid of atmospheric ambient ballads in the style of lead singer 's contemporaneous albums and more dissonant experimental styles that sometimes echoed the work of and . The album was mostly recorded at Miravel Studios, France, between September 1989 and April 1990.

All members of the band aside from Sylvian wished to retain the Japan moniker which was last used when the band split in December 1982. However, Sylvian levered increasing artistic and production control over the project (including his insistence on using the RTC name, much to the other member's bemusement and annoyance), to the point where the recording developed from a band effort into a what was essentially another Sylvian solo project, leaving the other members as mere sessioners for the front man.

Blackwater was released as the album's only cut and just missed the Top 60 in the UK singles charts in March 1991. The album itself was, in general, critically acclaimed by the music press and reached the Top 25 in the UK albums chart.

"...the album is at its best. Rain Tree Crow is not ponderous, as Japan once had pretensions to be, but it fills a darkened room nicely." -- Sue Peter, Option, 92

The following tracklisting is for the re-mastered version of the album released in 2003. It contains an additional track not featured on the original album; called "I Drink to Forget," the song was the B-side of "Blackwater," the only single released from the album. The original album was released on , and contained tracks 1 to 12, as listed below, in precisely the same order.