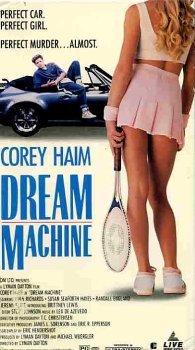 
"Dream Machine" is a independent thriller, starring , and . The screenplay was written by Eric Hendershot and based on the old urban legend of a wife selling off a for a suspiciously low price to get revenge on a cheating husband. The film was released onto home video in 1990 and distributed by and the .

A suspicious Mrs. Chamberlain () hires a private detective to spy on her husband. When she receives the confirmation later that night that her husband is with another woman, she proceeds to location.

Whilst she is on the way, Lance Harper (), murders the wealthy woman's husband, Jack Chamberlain (), who Harper was in various trouble with at the time. The body is stored in the trunk of his Porsche. Upon the arrival of Chamberlain's wife, who came to take back the Porsche, Harper disappears into the night, as Mrs. Chamberlain drives away, not knowing her cheating husband has been murdered and is in the trunk of the car she is driving.

Barry Davis, played by is doing his rounds as a piano tuner, for his parents' business whilst they are on holiday when his dreams of fast cars become a reality when he is given a silver turbo for free by Mrs. Chamberlain who wants to get even with her cheating husband, whom she had originally purchased it for.

Davis, who cannot believe his luck, does not realise that Jack Chamberlain's corpse is under the hood of his dream car. While Davis is evading fraternity boys and pursuing his dream girl, he becomes mixed up in the homicide as Lance Harper tracks him down by phoning every 'Barry Davis' in the phone book and asking 'Is this Barry Davis the piano tuner?'. Harper homes in on him and a fight ensues in the Davis household. Barry eventually overpowers Lance and he is arrested. In the end he keeps the car, gets the girl and has a neat blonde haircut.