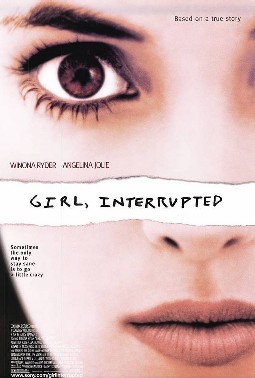 "Girl, Interrupted" is a 1999 film drama about a teen's 18-month stay at a mental institution, starring and . It was adapted from the original memoir "" which was written by herself, and directed by . The screenplay was written by James Mangold and . The original music score was composed by . The film is rated R by the , for strong language and content relating to s, sexuality, and .

(Ryder), 18 years old in April 1967, voluntarily checks herself into the fictitious Claymoore Hospital (based on , the actual institution featured in the memoir), after an overdose of and . The hospital is run by Nurse Valerie Owens (). Kaysen is diagnosed with , and her stay extends one year.

She befriends fellow patients Polly "Torch" Clark (), a burn victim, Georgina Tuskin (), a , Daisy Randone (), a sexually-abused girl, and others, and forms a small troupe of troubled women in her ward. Susanna is enchanted in particular by the sociopathic Lisa Rowe (), the wildest and most hardened of the group. Lisa is a force to be reckoned with: she is magnetic, rebellious, won't take her medication and she breaks down the other patients' self-esteem on a regular basis. Due to the fact that her last best friend, Jamie, couldn't make it when she ran away, Lisa befriends Susanna and together they start causing trouble. Lisa encourages Susanna to stop taking her medications and/or trade them with others, and generally resist the influences of therapy (referred to by the patients as diag-"nonsense").

During a visit outside the ward at a nearby soda shop, Susanna is confronted by her mother's friend, the angry wife of a man Susanna had had an affair with. The woman harshly berates Susanna, but Lisa intervenes with a verbal assault, horrifying the older, conservative woman. Lisa then encourages an uprising amongst the girls, resulting in everyone barking like s. As a result, Lisa loses her outside privileges.

Susanna's former boyfriend, Tobias "Toby" Jacobs (), comes to visit her and she tries to have sex with him in her room. He tells her he wants them to run away to Canada together so that he doesn't have to go to . He tells her she isn't crazy and that the girls in the asylum aren't really her friends. But she refuses to go with him, subconsciously beginning to rely on Lisa.

Time passes, and a night comes when Polly awakes screaming "My face, my face!" The nurses remove her and place her into solitary confinement with the intention of calming her down, but she continues sobbing. Troubled, Susanna (with the help of Lisa's keys) steals a guitar and they sit outside Polly's room, singing. Eventually, staff members notice. When an (John, Susanna's friend: ) walks by, she pulls him to the ground and kisses him.

The next morning, Susanna is called into the office, where she is analyzed once more. Susanna meets the head psychiatrist, Dr. Sonia Wick (), and tells her that she is ambivalent, meaning that she doesn't care. However, Dr. Wick sees through the charade and decides to have Susanna see her from now on. Then Lisa is taken in to see the doctor, but doesn't return and Susanna falls into a depression. The frustrated Nurse Valerie has had enough and throws her into an ice cold bath to wake her. After Susanna attacks her verbally she tells Susanna that she doesn't know what she's doing; that "she is a spoiled, lazy little girl who is driving "herself" crazy!" She adds that if Susanna isn't careful she'll "throw her life away on some stupid rebellion."

Lisa and Susanna break out of Claymoore with the intention of going to work in (which did not open to the public until 1971). They spend the night at the house of the recently released Daisy, who hangs herself the next morning after Lisa antagonizes her about Daisy's incestuous relationship with her own father. Lisa shows no remorse for her actions while Susanna sobs heavily while looking at Daisy's dead body. Lisa runs away, while Susanna calls the police and returns to the hospital. Susanna also adopts Daisy's pet Ruby. In the next few weeks, she begins to cooperate with her doctor and the therapy seems to be helping. She is scheduled to be released.

However, Lisa eventually returns after the police bring her back, upon finding out about Susanna's pending release, develops a vendetta against her. On her last night, Susanna awakes to discover Lisa in the maze of corridors beneath the ward, reading her diary to the other girls, resulting in some serious hostility against Susanna. In the ensuing dispute, Lisa threatens to stab herself with a large , but Susanna disarms her by accidentally smashing her own hand in a metal door. Susanna launches a pointed verbal attack upon Lisa, telling her that no one cares if Lisa dies because she "already is dead" and her "heart is cold", and that Susanna will start her life again out of the hospital without Lisa and everyone else. Her words having hit home, Lisa undergoes a mental breakdown.

Susanna is released the next day. Before she leaves, she first visits Lisa and talks to her again. Lisa says "I'm not really dead". Susanna reassures Lisa that she knows, and that Lisa was going to get out of that place and come see her. As Susanna leaves, she says goodbye to all her friends, giving Polly her adopted cat Ruby, and gets into the cab, insightfully saying, "Crazy isn't about being broken, or swallowing a dark secret. It's you, or me, Amplified..."

At the end of the film, Susanna states that by the , most of her friends were released. Although the movie doesn't elaborate on this, the book reveals that both Georgina and Lisa were later released.

* as
* as Lisa Rowe
* as Georgina Tuskin
* as Daisy Randone
* as Polly "Torch" Clark
* as John
* as Tobias "Toby" Jacobs
* as Dr. Melvin Potts
* as Dr. Sonia Wick
* as Valerie Owens, RN
* as Janet Webber
* as Cynthia Crowley
* as Annette Kaysen
* as Professor Gilcrest
* as Barbara Gilcrest
*Ray Baker as Carl Kaysen
* as Bonnie Gilcrest
* as Dr. Crumble

The author, Susanna Kaysen, was among the detractors of the film, angered by the "melodramatic drivel" Mangold used with the script by conjuring up many stories that never happened in the book (such as Lisa and Susanna running away together). [ *Danker, Jared. [http://www.thejusticeonline.com/media/storage/paper573/news/2003/02/04/Arts/Susanna.Kaysen.Without.Interruptions-359132.shtml?norewrite200612031355&sourcedomain=www.thejusticeonline.com "Susanna Kaysen, without interruptions"] , "The Justice", February 4, 2003. ]

Filming took place along in , as well as in in . Mechanicsburg was chosen for its old fashioned appearance and its old style drug store simply titled "Drugs," all of which gave the film its time-dated appearance. [ [http://www.rootsweb.com/~asylums/harrisburg_pa/index.html Information on the filming of Girl, Interrupted at Harrisburg State Hospital] , including a studio press release on the building and .] Deleted scenes were also filmed at Reading's Reading Public Museum.