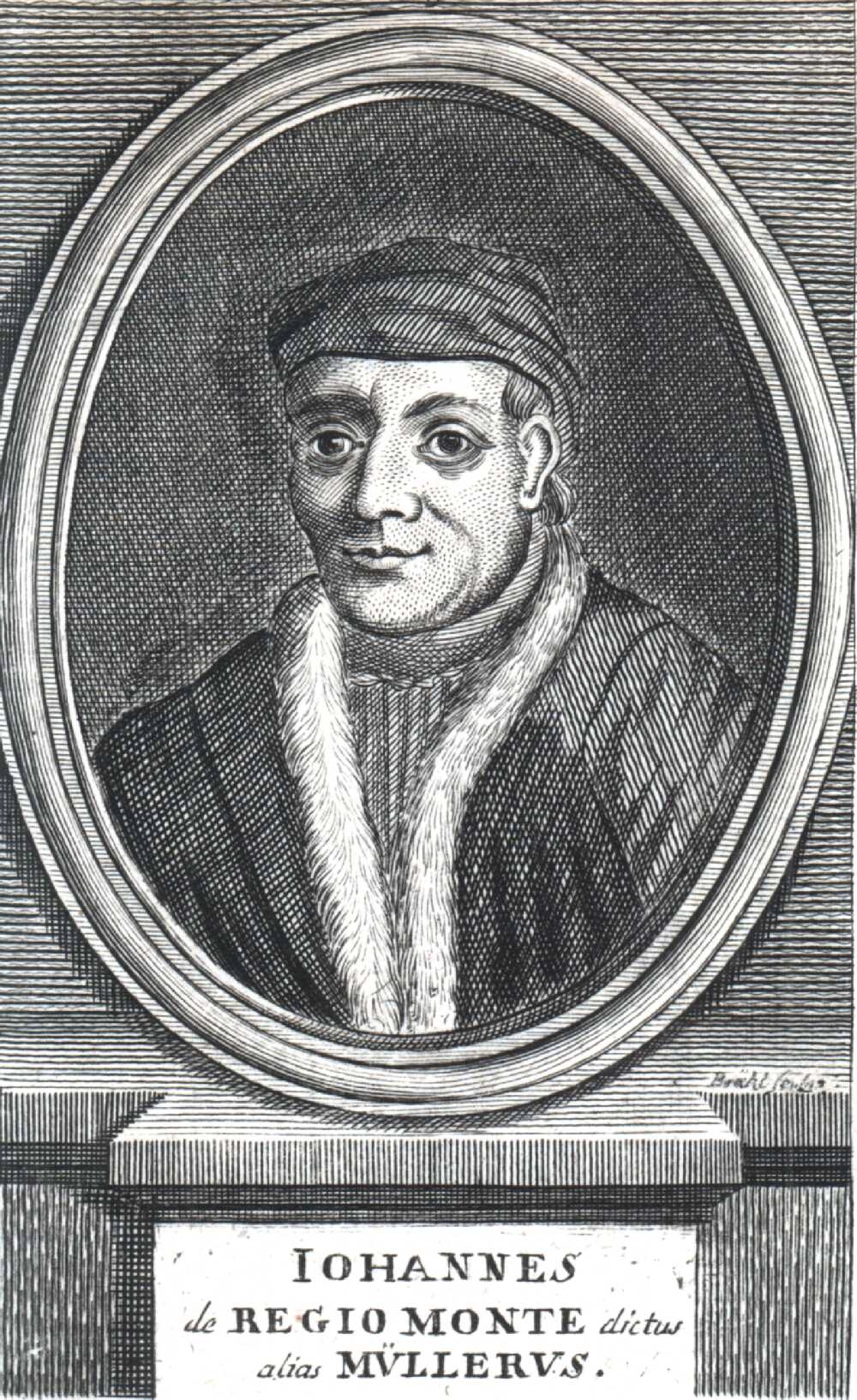 Johannes Müller von Königsberg (, &ndash; , ), known by his Regiomontanus, was an important German , and .

He was born in the n village of near , not in the more famous in .

Thus, he is also called Johannes Müller, der Königsberger (Johannes Müller of Königsberg). His full name was "Joannes de Regio monte", which abbreviated to "Regiomontanus" (from the Latin for "Königsberg"—"King's Mountain").

At eleven years of age, he became a student at the university in , . Three years later he continued his studies at Alma Mater Rudolfina, the university in , . There he became a pupil and friend of . In 1457 he graduated with a degree of "magister artium" (Master of Arts) and held s in and ancient literature. He built s for and , and in 1465 a portable for . His work with Peurbach brought him to the writings of (Cusanus), who held a view. Regiomontanus, however, remained a geocentrist after . Following Peurbach's death, he continued the translation of Ptolemy's which Peurbach had begun at the initiative of . From 1461 to 1465 Regiomontanus lived and worked at Cardinal Bessarion's house in . He wrote "De Triangulis omnimodus" (1464) and "Epytoma in almagesti Ptolemei". "De Triangulis" (On Triangles) was one of the first textbooks presenting the current state of and included lists of questions for review of individual chapters. In it he wrote:

:"You who wish to study great and wonderful things, who wonder about the movement of the stars, must read these theorems about triangles. Knowing these ideas will open the door to all of astronomy and to certain geometric problems."

In the "Epytoma" he critiqued the translation, pointing out inaccuracies. Later would refer to this book as an influence on his own work. In 1467 Regiomontanus left Rome to work at the court of . There he calculated extensive astronomical tables and built astronomical instruments.

In 1471 he moved to the Free City of , in , then one of the Empire's important seats of learning, publication, commerce and art. He associated with the humanist and merchant who sponsored the observatory and the printing press. Regiomontanus remains famous for having built at Nuremberg the first astronomical observatory in Germany. In 1472 he published the first printed astronomical textbook, the "" of his teacher Georg von Peurbach. Peurbach worked at the Observatory of (Oradea) in , the first in , and established in his "" this Transylvanian town's observatory as lying on the of Earth.

In 1475 he went to Rome to work with on . On the way he could publish his "Ephemeris" in Venice. Regiomontanus died mysteriously in Rome, , a month after his fortieth . Some say he died of plague, others by (more likely) ation.

A prolific author, Regiomontanus was internationally famous already in his lifetime. Despite having completed only a quarter of what he had intended to write, he left a substantial body of work. , the teacher of , referred to Regiomontanus as having been his own teacher.

It is not true that he came to be called posthumously after the place of his birth, Königsberg/Bavaria (in Latin, "Regiomontanus"). In Regiomontanus' day it was common for scholars to Latinize their names when publishing.

He is known for having built one of the most famous , the wooden of Regiomontanus, which flew from the city of to meet the emperor, saluted him, and returned. He also built an iron fly of which it is said it flew out of Regiomontanus's hands at a feast, and taking a round, returned to him.

Regiomontanus crater, on the , is named after him.

One biographer has claimed to have detected a decline in Regiomontanus' interest in over his life, and came close to asserting that Regiomontanus had rejected it altogether. But more recent commentators have suggested that the occasional expression of about prognostication reflected a disquiet about the procedural rigour of the art, not about its underlying principles. It seems plausible that, like some other , Regiomontanus concentrated his efforts on because he felt that could not be placed on a sound footing until the celestial motions had been modeled accurately.

In his youth, Regiomontanus had cast (s) for famous patrons. His "Tabulae directionum", completed in , were designed for use and contained a discussion of different ways of determining . The calendars for 1475-1531 which he printed at contained only limited astrological information—a method of finding times for according to the position of the ; subsequent editors added material.

But perhaps the works most indicative of Regiomontanus' hopes for an ly sound astrology were his s or ephemerides, produced first in for his own benefit, and printed in for the years 1475-1506. s and observations were juxtaposed by Regiomontanus in his manuscript almanacs, and the form of the printed text enabled scholars to enter their own weather observations in order to likewise check predictions; extant copies reveal that several did so. Regiomontanus' "Ephemeris" would be used in 1504, by a stranded on , to intimidate the natives into continuing to provision him and his crew from their scanty food stocks, when he successfully predicted a for , . [, "Christopher Columbus, Mariner", 1955, pp. 184–92.]

Regiomontanus did not live to produce the special commentary to the ephemerides that he had promised would reveal the advantages the almanacs held for the multifarious activities of s, for human births and the telling of the , for , for the inauguration of , and for a host of other activities, although this lack was again made good by subsequent editors. Nevertheless Regiomontanus' promise suggests that he either was as convinced of the validity and utility of as his contemporaries, or was willing to set aside his misgivings for the sake of commercial success.

noted that much of the material of on spherical trigonometry was plagiarised from the twelfth-century work of the [ [http://press.princeton.edu/chapters/i8583.html Victor J. Katz-Princeton University Press] ]