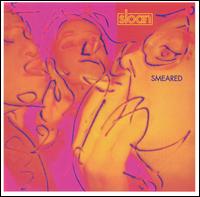 
"Smeared" was the first full-length album released by the Canadian rock band Sloan. It was released in Canada in October, 1992, and in the in January, 1993, on . Like their first release, the "", it was seen as a noisy pop record reminiscent of with Beatles-style harmonies.

of fellow Halifax, band sang backup vocals on "What's There To Decide".

All songs were written and performed by Sloan.