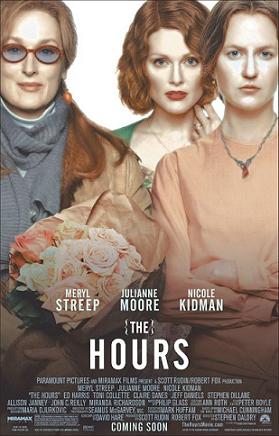 "The Hours" is a 2002 based on 's 1999 and PEN/Faulkner Award-winning 1998 novel, "The Hours". The story is about three women of different generations and times whose lives are interconnected by 's novel, "".

All the action takes place within the span of one day as followed in three different time periods. Thus, portrays the renowned British author Virginia Woolf in a fictitious day of that author's life in 1923, the day that she decides to start writing her new book "Mrs. Dalloway" at her house in Richmond; plays Laura Brown, a troubled housewife living in Los Angeles in 1951, on a day when she happens to begin reading Woolf's already published book "Mrs. Dalloway"; and plays a woman who is a future embodiment of the Mrs. Dalloway created in Virginia Woolf's novel nearly eighty years before, a book editor living in New York in 2001 who spends her day on arranging the details of a party that she will host that night.

The film's screenplay was written by David Hare, and the film was directed by , with a soundtrack by .

One of the most acclaimed films of 2002, "The Hours" received many awards and award nominations. It won the 2003 and received nine Academy Award nominations. Kidman won both the and the Oscar for Best Actress for her role in the film.

The plot for the film adaptation of "The Hours" stays remarkably true to the original novel. The main premises of the story can be taken from one of its lines uttered by Virginia Woolf, that of "a woman's whole life in a single day -- just one day -- and in that day, her whole life." This idea, also in Cunningham's novel, is taken from Virginia Woolf's real novel, . In that story Woolf imagined a woman whom the reader follows through a single day as she too makes arrangements for a party later that night.

The three distinct storylines are fragmented and edited to alternate repeatedly throughout the film's showing. In adapting it, the screenwriter David Hare managed to shape a thriller out of the novel's plot, leaving the film's audience to piece together the bonds that tie the story's three female protagonists.

"The Hours" was well received by critics and has an 80% "fresh" rating on the prominent critics reviews site .

Quote box|align=right|width=25%|quote="...there are also some of them, who will never understand that picture. And I wouldn't call them fools, rather the lucky one, who have never experienced so much desperation, that these women have."|source=Polish reviewer Kinga Kozakiewicz [

The main praise for "The Hours" came in the form of its acting, specifically for , who with a prosthetic nose was barely recognizable in her role as . Stephen Holden of wrote "Ms. Kidman, in a performance of astounding bravery, evokes the savage inner war waged by a brilliant mind against a system of faulty wiring that transmits a searing, crazy static into her brain." Indeed, Kidman went on to win both the Golden Globe for Best Dramatic Actress and Oscar for Best Actress. In both ceremonies she was nominated alongside co-star , who was nominated for "", while and received Golden Globe nominations (Streep in the same category as Kidman), and and Ed Harris received Oscar nominations in the supporting actress and actor categories.

Not all reviews were positive. Magazine’s Richard Schickel said:

Watching The Hours, one finds oneself focusing excessively on the unfortunate prosthetic nose Kidman affects in order to look more like the novelist. And wondering why the screenwriter, David Hare, and the director, Stephen Daldry, turn Woolf, a woman of incisive mind, into a hapless ditherer. [...] But this movie is in love with female victimization. Moore's Laura is trapped in the suburban flatlands of the '50s, while Streep's Clarissa is moored in a hopeless love for Laura's homosexual son (Ed Harris, in a truly ugly performance), an AIDS sufferer whose relentless anger is directly traceable to Mom's long-ago desertion of him. Somehow, despite the complexity of the film's structure, this all seems too simple-minded. Or should we perhaps say agenda driven? The same criticisms might apply to the fact that both these fictional characters (and, it is hinted, Woolf herself) find what consolation they can in a rather dispassionate lesbianism. This ultimately proves insufficient to lend meaning to their lives or profundity to a grim and uninvolving film, for which Philip Glass unwittingly provides the perfect score — tuneless, oppressive, droning, painfully self-important. [http://www.time.com/time/magazine/article/0,9171,1101021223-400004-4,00.html]