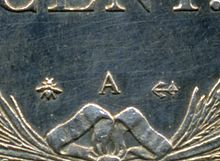 Privy mark (left) and mint mark on a Dutch coin. The mint mark is that of the mint of Utrecht. Since 1830 (with an interruption in 1941-1945) this mark is pressed on all Dutch coins.

A mint mark is an inscription on a coin indicating the mint where the coin was produced.

Mint marks were first developed to locate a problem. If a coin was underweight, or overweight, the mint mark would immediately tell where the coin was minted, and the problem could be located and fixed. Another problem which could occur would be a dishonest mint official debasing the coin, or putting less precious metal in the coin than specified. The first mint marks, called "Magistrate Marks" were developed by the Greeks, and named the Magistrate in charge of producing that coin. Debasing a coin, or otherwise tampering with it, was a very serious crime, often punishable by death in many civilizations. For example, in 1649, the directors of the Spanish colonial American Mint at Potosi, in what is today Bolivia, were condemned to death for seriously debasing the coinage. The initials of the assayer as well as the mint mark were immediate identifiers when the coins were inspected.

In the 19th century, numismatists (coin collecters) did not generally collect coins according to mint mark; rather, they attempted to obtain date sets of coins. A turnaround began after 1893, when A. G. Heaton's "A Treatise on Coinage of the United States Branch Mints" was published. Heaton cited example after example of mint-marked coins that were much scarcer than Philadelphia products and that should bring high premiums. When the United States abandoned silver coinage in 1964, mint marks were removed from the new copper-nickel coins in the belief that it would reduce the removal of coins from circulation by collectors. The silver coins quickly disappeared from circulation, and it was feared that if collectors saved too many of the new coins, there would be a serious shortage of coinage. Mint marks were returned to United States coins in 1968.

Examples of mint marks in United States coinage include P for the Philadelphia Mint, D for the Denver Mint, S for the San Francisco Mint, and W for the West Point Mint. In the past, CC for the Carson City Mint, C for the Charlotte Mint, D for the Dahlonega Mint, and O for the New Orleans Mint were used. Most coins of the Philadelphia Mint earlier than 1980 are unmarked, the notable exceptions being wartime nickels and the Susan B. Anthony Dollars starting 1979. Currently, the Lincoln cent is the only coin that does not always have a mint mark, using a "D" when struck in Denver but lacking a "P" when ostensibly struck at the Philadelphia mint; this practice allows additional minting of the coin at the San Francisco mint ("S") and West Point mint ("W") without the use of their respective mint marks to supplement coin production without the concern of creating scarce varieties. Generally modern "S" and "W" coins do not circulate, being mostly produced as bullion, commemorative, or proof coinage.

Although the US and several other countries use the initial letter of the city for its mint marks, this practice is not universal. For instance, Germany used A for Berlin, D for Munich, E for Muldenhutten, F for Stuttgart, G for Karlsruhe and J for Hamburg.

Many mints of the world commonly use a Privy mark, which is a symbol unique to each mint. The Royal Canadian Mint commonly uses a maple leaf privy mark. The Monnaie de Paris uses many different privy marks to denote each branch mint, including a torch, cornucopia, or thunderbolt.

Many Islamic coins bear an inscription telling which mint produced the coin. This inscription is often the name of the city where the coin was minted spelled out in Arabic script.