The Nine Lives of Fritz the Cat

The Nine Lives of Fritz the Cat

Infobox_Film
name = The Nine Lives of Fritz the Cat 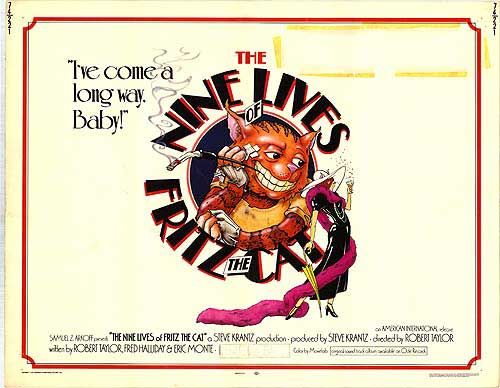 "The Nine Lives of Fritz the Cat" is a 1974 animated film directed by Robert Taylor. It is an featuring a series of drug-induced both related and unrelated to life in the 1970s. Starring as the voice of the titular feline protagonist , the film is a sequel to "Fritz the Cat", the first animated film to receive an in the . Unlike its predecessor, "Nine Lives" received an R rating. It was also less well-received by critics and audiences alike, although it has since gained an audience as a .

Fritz the Cat (voiced by ) is now married, with a child. As his wife (voiced by Reva Rose) screams at him, and his infant son masturbates, Fritz sits on the couch, staring off into space, smoking a joint. Tired of listening to his wife nag at him, he fades off into his own little world, imagining what life would be like for him if things were different. The first character he meets on his stoned journey is Juan (voiced by Peter Leeds), a Puerto-Rican, who takes offense when Fritz passes gas in front of him. The scene fades to a house where Fritz is seen sitting on the couch smoking a joint next to Chita (voiced by ), who complains when he blows smoke in her eyes. His reaction is to tell her to loosen up and embrace her fellow man... and before she knows what hit her, he has shoved a joint into her mouth, taking her off into her own hallucinogenic fantasy. The pot makes her horny. Meanwhile, outside, a pair of s are about to rob the place, but decide to stay outside and watch what happens inside instead. It is revealed that Chita is Juan's sister, and his absence is explained as being that he has "gone to the store." A car pulls up: it's what Fritz perceives to be Chita's old man, who blows Fritz apart with a shotgun. This violent display turns off the two crows, who decide to "come back at another time." Back into reality, we see that Fritz continues to fantasize while his wife continues to rant, saying that he has done nothing for his son, "Ralphie," other than teaching him how to masturbate. In another fantasy, Fritz meets a drunken bum claiming to be , who tells him "I made the fucking world in seven days. Try it some time." In the film's second story, Fritz hallucinates that he is a soldier in WWII-Era Nazi . After being caught having a with two German girls by a commanding officer (the two girls being the poor swine's wife and daughter), Fritz escapes, and winds up being an assistant to . Fritz takes the form of a therapist, and analyzes Hitler, telling him that his world domination plans were just a way of trying to get attention. In the showers, Hitler "accidentally" drops his soap, and urges Fritz to pick it up, in an attempt to him, and ends up getting his single blown off. In this segment, Fritz meets his death by way of the US Army. Back in 1970s-era New York, Fritz attempts to sell a used condom to a liquor store owner who bets he knows who Fritz used it on. The two break out laughing as they take turns describing the woman. Fritz at one point blurts out "You know what...? She's got the clap!" When the liquor store owner asks who her name is, Fritz responds by telling him "Gina." The liquor store owner responds: "But that's my wife's name! She don't have the clap!" Fritz tells him "she does now," causing the store owner to curse and shout at Fritz. As he walks out of the store, Fritz bumps into a pig named Lenny. Fritz tells him that he was an irresistible stud in the 1930s. A psychedelic montage of old stock film and animation follows, vaguely illustrating Fritz's downfall in the 30s (losing everything to excessive partying and drinking). In the next scene, Fritz shows up at a pawn shop run by Morris, who is ish, and tries to get a welfare check cashed. Fritz tries to make a deal with Morris: If Morris will cash Fritz's welfare check, then Fritz will give Morris a toilet seat. Morris, doesn't like the deal, but suddenly getting diarrhoea from the pickles he has been eating, he reluctantly accepts the deal, but instead of cashing Fritz's welfare check, he gives Fritz a space helmet. "I think I've just been screwed," Fritz says. Afterwards, hires Fritz to go into space on the first mission to Mars. While waiting for the shuttle to take off, Fritz decides to have sex with one of the reporters, a black girl. However, the space shuttle takes off a little early, and, once in space, it explodes.In Fritz's next life, we flash-forward to a future where is a separate country from the rest of the United States. The crow-dominated city-turned-country has been renamed "New ." Fritz is just starting his job as a courier, and he is asked by President to deliver a letter to New Africa. In New Africa, Fritz finds a high rate, corruption, and . Once Fritz is lead to "The Black House," we find the president of New Africa and his vice-president talking about how low his popularity is, and how an attempt would boost his popularity. The president of New Africa refuses to get shot. However, the vice president needs his president's popularity to increase so he will not lose the upcoming election. So, in order to do so, he kills the president, and blames the assassination on Fritz, because he is the only "white" cat in New Africa. In the final story, Fritz finds himself living in the sewers of New York, where he meets an n , and the . However, Fritz is given a rude awakening from his drug-induced reality by his wife, who finally throws him out of the apartment. After a quick look at all of his lives, Fritz sighs and says "This is about the worst life I've ever had."

The film's title has been seen as ironic, as the character's creator, , had previously drawn a story in which the character was killed. [cite book |last=Harvey |first=Robert C |title=The Art of the Comic Book: An Aesthetic History |year=1996 |month= |publisher=Univ. Press of Mississippi |pages=page 218 ]

Although filmmaker had written and directed the film's 1972 predecessor, he chose not to direct "The Nine Lives of Fritz the Cat" in favor of "", and had absolutely no involvement with the film. However, Bakshi has sometimes been incorrectly credited as having worked on the film, such as in Jeff Lenburg's "Who's Who in Animated Cartoons", which claims that Bakshi had been a producer on the film. [cite book |last=Lenburg |first=Jeff |title=Who's Who in Animated Cartoons |year=2006 |publisher=Hal Leonard |isbn=155783671X |pages=page 15 ] Directorial duties were instead given to Robert Taylor, an animator who had worked on "", a superhero spoof Bakshi created in the 1960s. Stylistically, Taylor attempted to recreate only some of the elements and themes of the original film. The setting of the film's period is similar to that of the first film, with the speaker addressing the audience with "jump back, baby." However, unlike the first film, "The Nine Lives of Fritz the Cat" was made during the era it was set in. Because the filmmakers only had three years of history to work with, much of the film diverges into various different storytelling directions, including sections focusing on the 1930s, , and an alternate future. The film's ending credits play over animation of Fritz dancing down the street in tune with Tom Scott's music.

Taylor cowrote the film's screenplay with Fred Halliday and Eric Monte. Steve Krantz would later produce Monte's screenplay "", which was developed into the television sitcom "".

The music for this film was performed by Tom Scott and the L.A. Express. A full was planned for official release, but the album never came out because of the film's failure to garner significant box office revenue. However, a 45 RPM single featuring two songs from the film, "Jump Back," and "TCB in E" was released in 1974. [cite web |url=http://www.blaxploitation.com/s_360.html |title=Soundtracks: "Nine Lives Of Fritz The Cat", Tom Scott, 1974 |accessdate=2007-04-09 |last= |first= |authorlink= |coauthors= |date= |year= |month= |format= |work= |publisher=Blaxploitation.com |pages= |language= |archiveurl= |archivedate= |quote= ] A live version of "TCB in E" was later released on Tom Scott's "Smokin' Section" album in 1999. The album's liner notes do not mention the film.

"The Nine Lives of Fritz the Cat" was the first animated feature in Cannes history to compete as part of the official competition.

Both "Fritz the Cat" films are available on through in the USA, and in the UK as part of a DVD entitled "The Fritz the Cat Collection".