An image with artificially increased accutance 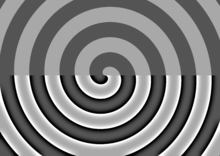 Another illustration, where overshoot caused by using unsharp masking to sharpen the image (bottom half) increases acutance.

In photography, acutance is the edge contrast of an image. Acutance is related to the amplitude of the derivative of brightness with respect to space. Due to the nature of the human visual system, an image with higher acutance appears sharper even though an increase in acutance does not increase real resolution.

In the example image, two light gray lines were drawn on a gray background. As the transition is instantaneous, the line is as sharp as can be represented at this resolution. Acutance in the left line was artificially increased by adding a 1 pixel wide darker border on the outside of the line and a 1 pixel wide brighter border on the inside of the line. The actual sharpness of the image has been decreased because the transition takes place across 4 pixels, but the apparent sharpness is increased because of the greater acutance.

Artificially increased acutance has drawbacks. In this somewhat overdone example most viewers will also be able to see the borders separately from the line, which create two halos around the line, one dark and one shimmering bright.

Several image processing techniques, such as unsharp masking, can increase the acutance in real images. 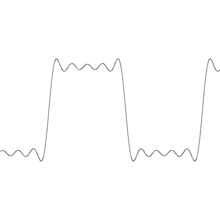 One definition of acutance is determined by imaging a sharp "knife-edge", producing an S-shaped distribution over a width W between maximum density D1 and minimum density D2 – steeper transitions yield higher acutance.

Summing the slope Gn of the curve at N points within W gives the acutance value A,

Coarse grain or noise can, like sharpening filters, increase acutance, hence increasing the perception of sharpness, even though they degrade the signal-to-noise ratio.

The term critical sharpness is sometimes heard (by analogy with critical focus) for "obtaining maximal optical resolution", as limited by the sensor/film and lens, and in practice means minimizing camera shake – using a tripod or alternative support, mirror lock-up, a cable release or timer, image stabilizing lenses – and optimal aperture for the lens and scene, usually 2–3 stops down from wide-open (more for deeper scenes: balances off diffraction blur with defocus blur or lens limits at wide-open).