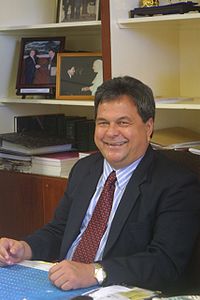 Retzlaff was educated at King's College in Auckland, New Zealand.[1] He studied law at the University of Auckland before going on to practice law in Samoa.[1] He was appointed Attorney-General of Samoa in 1986.[2]

In 1988 he resigned his position as Attorney-general to run for election, winning the seat of Falelatai & Samatau. Initially part of the opposition, he joined the government of Tofilau Eti Alesana in 1991 as Minister of Agriculture, Forests, Fisheries and Shipping.[1] In 1996 he became Minister of Health, and in 2001, Deputy Prime Minister. In addition to that role, he currently holds the portfolios of Commerce, Industry and Labour.[3]

He has stated he will not be standing to retain the seat he has held for 22 years in the 2011 general election.[4]

Retzlaff is of German-Samoan descent, having inherited his German ancestry from his paternal grandfather.[5] His name "Telefoni", is the name that was given by the Samoan community in the early twentieth century, to his grandfather, when he arrived in the German colony, as a public servant of the postal services, to introduce the telephone to the country.

He has had two books published; "Love and Money", a love story about the richest young bachelor in Auckland New Zealand falling in love with and marrying the young Samoan kitchen help from his exclusive boarding school; and "To Thine Own Self be True", a collection of articles, speeches and poems.[2]

In February 2011 Telefoni confirmed he was retiring from politics at the 2011 election.[6] See a short tribute to Misa Telefoni published in the Samoa Observer 9th March 2011, by his son Lemalu Hermann Paul Retzlaff. "Tribute to Misa Telefoni" - http://www.samoaobserver.ws/index.php?option=com_content&view=article&id=31878:tribute-to-&catid=1:latest-news&Itemid=50