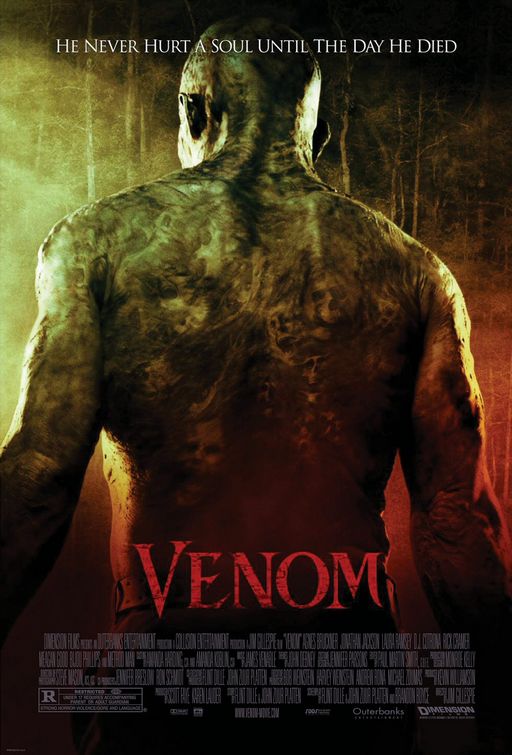 "Venom" follows the story of several teenagers lost in the s of trying to escape a mysterious evil.

When an aged Creole woman is caught in a car wreck in a remote section of , Ray (), the owner of a nearby filling station, is at the scene of the accident to help. However, Ray doesn't know that the woman is a voodoo practitioner and that her vehicle holds a case full of magic talismans in the form of poisonous snakes (hence the title). The magical spirits lead Ray to an unexpected death, and then they take over his body, turning him into a bloodthirsty zombie-like monster. As the reanimated Ray makes his way into town, a group of teenagers led by Eden () find themselves running for their lives from the supernatural creature, while Deputy Turner () looks for a way to keep the strange menace under control. One by one the teenagers are killed, the most inventive death at the hands of a sandblaster in a parking garage. Some teenagers venture to the old woman's house, in search of help from her granddaughter, CeCe. The house is a very large and very run-down plantation home. The "zombie" follows them there, but cannot enter because it had been blessed by CeCe's grandmother. The blessing is foiled when he hooks his tow truck up to one of the house's massive support piers, causing a small section to be yanked free and go flying across the yard, breaching the perimeter which must have somehow disturbed the barrier.

Venom went into release in the fall of -- only a few weeks after devastated much Southeast Louisiana, making the film seem unfortunately topical. However, the scenery was much more typical of the Region.

* Ray: dies from being bitten by poisonous snakes
* Miss Emmie: dies shortly after Ray does
* Terry: killed by Undead Ray; fate never shown
* Deputy Turner: slashed in the throat, and stabbed with a crowbar
* Patty: killed off-screen, but she is seen hanging and bleeding to death
* Tammy: Face ripped off with a sandblaster
* Ricky: Maimed and amputated at the arm
* Sean: impaled with a crowbar
* CeCe: slashed at the neck
* Rachel: Impaled into a tree
* Eric: stabbed in the head by ray to save his girlfriend from ray
* Undead Ray: run over by his own truck

from the wrote, “Even the undemanding high schoolers the film is aimed at will experience déjà voodoo, as "Venom" recites the A through Z of horror clichés. All hopes for suspense and plot twists are snuffed out about as quickly as the film’s black characters.”

Many critics found "Venom" to be a stereotypical teen slasher movie. Spence D. from IGN Movies called it a “Cookie cutter horror straight from the Swamps of Louisiana.”Peter Hartlaub from the said this about "Venom", “There’s nothing clever about this movie. It starts too slow, plot points are abandoned and even the killings start to run together.”