The Way We Were

The Way We Were

Infobox Film
name = The Way We Were 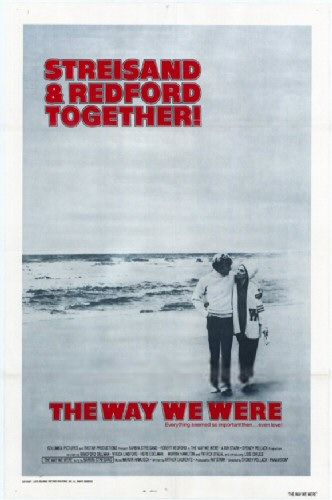 "The Way We Were" is a 1973 American film which tells the story of Katie Morosky, an intense ish woman, who marries Hubbell Gardner, a carefree but talented WASP, following . Fundamental differences in outlook and personality &ndash; as revealed in their responses to the rise of &ndash; eventually pull them apart. Starring and , along with , , and , the film is both a romance of star-crossed lovers and a morality tale about the importance of commitment.

An underlying theme is the elusive quality and role of : Externally, Hubbell's perfect features, aristocratic air, and self-assurance contrast with Katie's homeliness, awkwardness, and agitated yearning. But as the story unfolds, her sterling character emerges, while his gifts are squandered, untapped for any purpose beyond self-gratification. A bittersweet role reversal transpires, in which she blossoms as a true beauty, while he fades into slack insubstantiality (Streisand would later star in other films that reflect this trope, including "A Star is Born" and "").

The film was a runaway hit in theaters, and became the fifth-highest grossing film of 1973.

The movie was written by (whose novelization of the story was published in 1972) and directed by . Laurents wrote the role of Katie specifically for Streisand, basing the character on a woman he had met at college who was active in the .

A tells the story of an idealistic young woman, Katie Morosky (), who falls in love with Hubbell Gardner (), while they are college students in the 1930s. Their differences are immense: She is a Marxist, with strong anti-war opinions, and he is a laid-back troublemaker. She is drawn to him because of his ish handsomeness and his natural writing skill, which she finds confident and captivating, though he doesn't work very hard at it. He is intrigued by her conviction and her determination to persuade others to take up social causes.

The two meet again at the end of World War II. She is working at a radio station, and he, having served as a Naval officer in the South Pacific, is trying to return to a conventional life. They fall in love and marry, as much because of their differences in background and temperament as despite them. Soon, however, Katie is incensed by the cynical jokes Hubbell's friends make, unable to understand his acceptance of their insensitivity and shallow dismissal of political engagement. At the same time, his serenity is disturbed by her want of social graces and her polarizing postures.

When Hubbell seeks a job as a in , Katie is disappointed, believing it to be a waste of his literary talent, and encourages him to pursue writing as a serious challenge instead. Despite her growing frustration, they move to , where he becomes a successful, if desultory, screenwriter and the couple enjoys affluence and leisure. As the Hollywood blacklist grows and McCarthyism begins to encroach on their lives, Katie's political activism resurfaces, jeopardizing Hubbell's position and reputation.

Alienated by Katie's persistent abrasiveness, Hubbell has an affair with Carol Ann (), his college girlfriend and the ex-wife of his best friend J.J. (Bradford Dillman), even though Katie is pregnant with Hubbell's child. Katie and Hubbell decide to part, when she finally understands that he is not the man she idealized when she fell in love with him: he will always choose to take the easiest way out, whether it is cheating in his marriage or writing predictable stories for sitcoms. Hubbell, on the other hand, is exhausted, unable either to live on the pedestal Katie erected for him or to face her disappointment in his choice to compromise his potential.

In the film's final scene, Katie and Hubbell meet by coincidence, several years after their divorce, in front of New York's . Hubbell, who is with a stylish beauty and apparently content, is now writing for a popular sitcom as one of a group of hired and nameless writers. Katie, too, has remained faithful to who she is: flyers in hand, she is agitating for the newest political causes.

Katie, now re-married, invites Hubbell to come for a drink with his lady friend. He confesses he can't. Katie's response acknowledges what they both finally understand: Hubbell was at his best when he was with her, and no one will ever believe in him or see as much promise in him as she once did. Katies tells Hubbell how beautiful their daughter is. He asks whether Katie's husband is "a good father" to their child. He could not bear her expectations then, and cannot bear them now. All that Hubbell and Katie can ever share is a poignant memory of the way they were.

The film won for Best Music, Original Dramatic Score and Best Music, Song (, and for "The Way We Were"), and was nominated for Best Actress in a Leading Role (Barbra Streisand), Best Art Direction-Set Decoration, Best Cinematography and Best Costume Design.

In addition to the title song's Oscar win, Barbra Streisand's rendition of "The Way We Were" was a tremendous commercial success, becoming her first number-one single in the United States. It entered the in November 1973 and charted for 23 weeks, eventually selling over a million copies and lasting three weeks at number one in February 1974 (non-consecutive, as it was bumped from the top spot briefly by 's "Love's Theme"). On the chart, it was Streisand's second number-one hit after "People" in 1964. "Billboard" named "The Way We Were" as the number-one pop hit of 1974. "The Way We Were" was also the title song of a Streisand album that also hit number one (distinct from the soundtrack album of the movie, which peaked at #20.

Streisand also recorded an alternative version of the song that was so nearly identical to the original release that this alternative version is often misidentified as the original recording. The most easily noticeable difference between the two versions is the manner in which Streisand sings the words "whenever we remember" near the end of the song.

returned "The Way We Were" to the charts in the spring of 1975 in a live-recorded version. Knight preceded the sung lyrics to "The Way We Were" with a spoken-word passage incorporating the lyrics to "" from the musical . The record reached #11 in the United States and #4 in the UK (where it far outsold Streisand's original, which reached only #33 on the British chart).

performed the title song as her character Lisa Loopner, in her album and movie "".

In the Season Two finale of "", entitled "Ex and the City", the four main characters of the show discuss how 's romantic relationship resembles that in "The Way We Were".

In an episode of "", after Luke breaks up with Lorelei, she calls him and asked him to come over like the "girl in the movie "The Way We Were" did her ex-boyfriend.

In a scene in "Boys on the Side", Whoopi Goldberg's and Mary Louise Parker's characters watch "The Way We Were" in a hotel and discuss their difference of opinions about their own lives in comparison to the movie.

"The Way We Were" is mentioned in most books written by .

The second episode of 'The O.C.'s second season has "The way We Were" as its title.

and , are the titles of a season 2 and 15 episodes of respectively.

In an episode of that says how much nicer "The Way We Were" is than .

In their debut album, Girlicious did a cover of the song "The Way We Were", using all the original lyrics as well as some of their own.