Space Is the Place

Space Is the Place 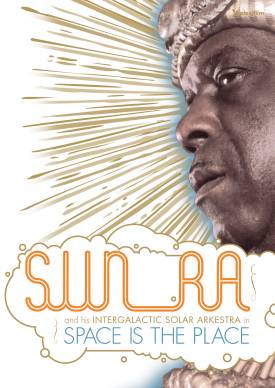 Like Ra himself, "Space is the Place" is one of a kind: part film, and all polemic parable — a mythopoetic manifesto, made by people who believed in Ra's mystical message as much as they appreciated his Afro-psychedelica.

Sun Ra, who has been reported lost since his European tour in June 1969, lands on a new planet in outerspace with his crew "The Arkestra" and decides to settle on this planet. The medium of transportation he had chosen is music. He travels back in time and returns to the strip club where he used to play piano with the name "Sonny Ray" in 1943. There he confronts The Overseer (Ray Johnson), a -overlord, and they agree on a duel at cards for the fate of the Black race. Each card drawn is a minor goal to achieve for Ra or The Overseer which will determine the winner of the duel. Then, to present time, Ra disembarks from his spaceship at and tries to spread his word by meeting with young Blacks at an Oakland youth centre and opening an "employment agency" to recruit people eager to move to the planet. He also agrees with Jimmy Fey (Christopher Brooks), the minion of The Overseer, to arrange radio interviews, a record album, and eventually a concert that will help him dictate his message. At the end, Ra takes Fey's "Black parts" with him to the spaceship, leaving him with his White parts. Fey, now , leaves The Overseer and The Overseer loses the duel. The planet Earth is destroyed after Ra's spaceship flies into the space.

Ra's greatest adversary in his quest is The Overseer, incarnation of evil in the Black community who poses himself to be a community leader and a man of charity. But in fact, he is the tool of the . Ra is also pursued by White government agents (presumably from FBI) who attempt to assassinate him. On the other hand, Jimmy Fey is representative of the Black people in industry and .

The space-age Garveyite message of Ra is ambiguous at times and metaphors employed are hard to interpret: He plays his music, which he describes as his instrument of transportation, to a Black and White audience. Of the three people shown applying to Ra's "employment agency", two are White, one of whom is a blonde attempting to seduce Ra. The Overseer feels he lost the duel only when he is left by Fey and Tania (Erika Leder), the major White figure in the film. Ra also takes "Chili Pepper" (Sinthia Ayala) a non-Black Hispanic prostitute to his spaceship along with a number of Black people who submit to his message, including radicalised youths from Oakland and a petty pimp junkie. Jimmy Fey is inclined to act like a buffoon until his "Black parts" are taken by Ra. After that, he becomes well-meaning and self-confident, addressing to The Overseer in the he had kept for radio broadcasts and in a humiliating way, losing his AAVE. The character of Tania is also problematic. She is originally a nurse who also lures her Black colleague Candy (Barbara Deloney) to the world of sex and money led by The Overseer. She seems to enjoy his company and being pimped by him but in a following scene, she is depicted as victimised. Finally, Tania (apparently also a favourite of Fey) leaves The Overseer, calling him a "" and goes with Fey.

In , the movie was re-released in its entire 82-minute format on , after a heavily-edited 63-minute version on . The original cuts were requested by Sun Ra, which director John Coney attributed to Sun Ra's prudishness. The scenes indeed follow a racy "pimps and hos" narrative that is not entirely congruous with the rest of the film, and there was a notable backlash from fans of the original film. The fact that the director inserted these scenes without the consent of Sun Ra does in fact leave room for scrutiny, considering the absence of Sun Ra in the scenes themselves.

Sun Ra: Space is not only high, it's low. It's a bottomless pit.

The Overseer: Do you really wanna continue this game? I can let you off easy now. Later...maybe not.Sun Ra: Just play.The Overseer: I like your style, Ra.

Agent: (presenting himself as a expert) That's exactly the kind of which is making it difficult for us people to work together. As a matter of fact we have a plan right now to put a coon on the moon by June.

Sun Ra: We are all instruments. We are all meant to play our part in the vast arkestry of the cosmos.