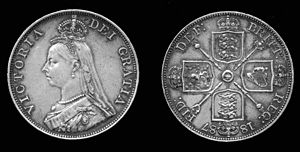 The obverse side of the coin shows a portrait of Queen Victoria wearing a veil, with the inscription "VICTORIA - DEI GRATIA"  (Victoria - By the grace of God), while the reverse side shows four cruciform-crowned shields bearing the emblems of England (x2), Scotland, and Ireland, with sceptres between the shields, in the style of Charles II's gold coins designed by John Roettiers; the inscription on the reverse reads, "FID DEF BRITT REG date".

The coin was introduced as part of a short-lived attempt at decimalization of the currency, after an earlier attempt had spawned the florin. Since it is equivalent to 20 new pence, the coin was not demonetized as part of the 1971 decimalization. The coins are not likely spent, though, as the silver content of each coin is worth far more than 20 pence.

The coin acquired the nickname of "Barmaid's Grief" due to its similarity to the slightly larger crown coin (worth 5 shillings, 25% more than the double florin), as neither coin was marked with its denomination and both used an identical portrait of Queen Victoria on the obverse.[2]

Some coins minted in 1887 (the first year) had a Roman 'I' instead of an Arabic '1' in the date. This went unnoticed for a time until corrected, allowing the balance of the mint run to be produced with the correct date. These two variations are worth approximately the same, making the series more interesting for collectors.[3]. Some coins dated 1888 and 1889 have an inverted arabic 1 instead of the second I in VICTORIA as the result of a broken punch.