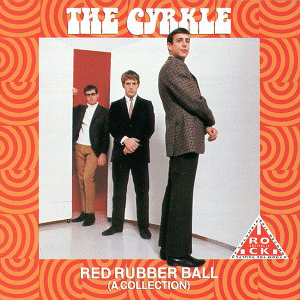 It was co-written by (of ) and (of ). [http://www.ckk.chalmers.se/guitar/sg-faq/4.html Guitar] According to Cyrkle Tom Dawes, Simon offered it to The Cyrkle when they were opening for Simon and Garfunkel on tour. [http://www.songfacts.com/detail.php?id=5489 Song Facts] [http://www.classicbands.com/cyrkle.html Classic Bands: The Cyrkle] The Seekers also recorded "Red Rubber Ball" for their 1966 album "" (US-title: "Georgy Girl") &mdash; and the Seekers' recording of "Red Rubber Ball" can also be heard on 'Disc Three - 1966 - 1967' of the CD "The Seekers Complete".

At "Music Notes", the for "Red Rubber Ball", for the "Simon and Garfunkel - Old Friends", also credits the songwriters as Paul Simon and Bruce Woodley [ [http://www.musicnotes.com/sheetmusic/scorch.asp?ppn=sc0028110 Music Notes] ]

*A recorded live cover was performed by .
*'s cover was played in the 2004 movie, "".
*Canadian group recorded a cover of this song as the first track on their debut album, "The Diodes" (1977). According to the liner notes of the 1998 Diodes anthology, "Tired of Waking Up Tired", the band recorded the cover because Paul Simon had been vocal in his disapproval of punk rock music.